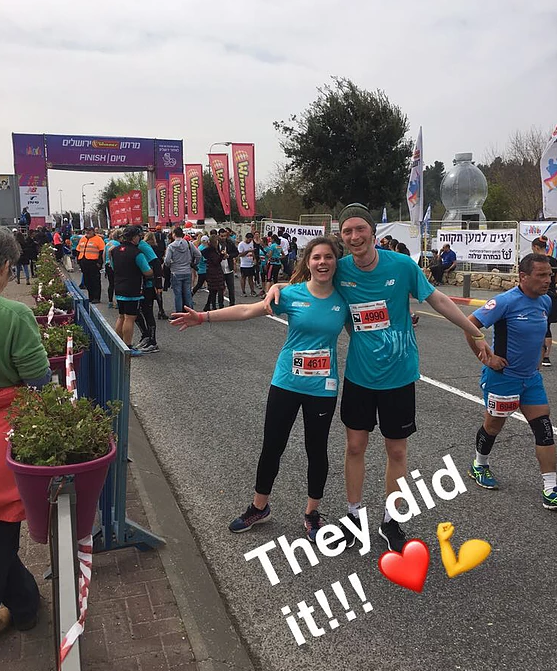 Nearly all of us have spent most of the week coughing and blowing our noses (maybe because we’re still recovering from Purim, maybe because we never open the windows in the flat).

In spite of this, I’ve felt a sense of determination to continue challenging ourselves to step up the level of discussion in our sessions. I’m really enjoying starting to feel the connections between everything we’re learning as our growing understanding of eachtopic enables us to think more deeply and laterally.

From a great Chinuch and Hadracha session where we talked about the failures of today’s education system, to analysing the complexities of our consumerist society in Economy and Ecology, its been a week full of important reality checks for Etgar.

After our first proper yom tnua (movement day) with machon on Monday, we’re ending our week with a two-day seminar focused on socialism. It’s a perfect end to such a thought provoking week to continue critiquing our social reality and think about the counter culture that we strive to create as Etgar Nof and as Netzer.

Here’s what some of the etgarniks have learnt this week:

This time last week we found ourselves crawling through the streets of Jerusalem in gridlock traffic in the height of rush hour. This bus journey however was not like the average Machon excursion. There was nobody being sick in a bag at the front, nobody was moaning about being desperate for the loo and there was nobody trying to sleep in a position that would even make a career contortionist jealous! This time, everyone was on the edge of their seat (still with seatbelts on of course!) because we were all craning our necks to take a look at the man of the moment, the birthday boy: Abe! Everyone was fully immersed and engaged (for once…) with looking at Abe squirm uncomfortably while we sang (if you can call our 36 strong cacophony singing) birthday songs at him. With this improvised party limo we ushered in the weekend. As is now tradition here in Kyriat Moriah, people flee for the weekend to all corners of Israel because of the prospect of eating another 6 meals in the Cheder Ochel.

The working week resumed as normal on Sunday with the day filled with our usual lessons including Hebrew, Zionism and Israel and Leadership Development. Monday has much the same structure with another set of lessons and “educational” evening programming after dinner. This time however we didn’t get a Jewish or Zionist education but in fact a Physical Education. The evening marked the official opening of the “Machon Machzor 129 Annual Inter-Movement Five-a-Side Football Tournament As A Way Of Choosing Between Conflicting Ideologies” or M.M.A.I.M.F.S.F.T.A.A.W.O.C.B.C.I. for short. The first match was a total whitewash with Habonim-Dror wiping the floor with the feeble Hineni with a closing score of 15-2. After this match was our time to shine. With crowds flocking from all around chanting “Noar Tzioni Reformi”, rivalling the size and enthusiasm of Beita Yerushalaim’s La Familia. This time however it wasn’t Betar in the stands but on the pitch. We kicked off but soon lost possession to the Betarim, which resulted in an unfortunately impressive goal. With a newfound rush of enthusiasm and Reform Zionist spirit we hammered in 3 more goals to close with a victorious Netzer. The football gods mush have thought that Pesach came early because tonight it seemed they were leaning to the left!

The evening was rounded off with yet another “educational” visit to play Laser Tag with the Etgarniks. This evening, the victories kept on flowing as I was crowned game-champion after successfully standing in a corner and shooting people from a far. Strangely enough these tactics were far more successful that those of former IDF soldier and Etgar Madrich; Ady. Apparently the game wasn’t adapted to suit his “lone wolf” tactics!

Tuesday was Yom Yisrael, which entailed us taking the bus across to Tel Aviv after our Global Studies class. We spent the day both exploring the street art scene while also taking a journey into the past as we learned about the pioneers who established the city. Days like this sometimes bring the weirdest and most wonderful “shnat stories” that are almost impossible to explain. What I can say is that we somehow started with talking about the Rothschild family and finished with 40 people sitting on the pavement in the middle of Tel Aviv having a lesson on drawing the perfect cactus.

Yesterday was Wednesday, which was Yom Tnua (Movement Day). We had our final lesson on Reform Judaism in which we delved into the mysterious world of Talmud study. Despite having to wade through the complexities of tradition and the intricacies of commentaries we all came out of the day feeling like the most scholarly of Haredi rabbis. We then got the chance to impress our Movemnt Worker Joe Grabiner with our knowledge over a big bowl of chips and falafel.

Today we had our weekly round up in our chavurot and another fascinating 5-hour lesson on Zionism with Machon veteran Steve Israel.

Overall this has been yet another great week on Machon and now that we are officially two thirds of the way through, we can’t wait to see what the next few months bring.

So Tom and I completed the half marathon. Whilst I’m smiling in this pic, I can tell u it was not enjoyable cos I decided half way through that I acc hate running ( I also have 2 purple toes now.) So plz go donate to help provide direct humanitarian aid to Syrians and to help make my toes feel better xx

HUGE Yeshar Ko’ach to Eve and Tom for raising over 1000GBP for this cause!!