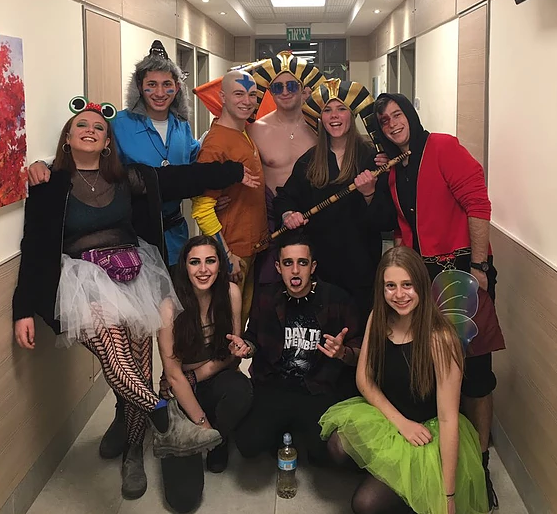 Last week was a Purim-centric week. What I learned was that everyone has a unique experience to Purim. As a result i have asked for a multitude of Netzer-Niks’ take on this incredible experience (and some costume photos too)

Purim is a fantastic chag because it lets us truly express our creativity as well as letting us make a political statement. I for example, dressed up as Captain America’s lesser know accomplice “Captain Reform Zionism”.

We can see here that this has been amazing. So amazing in fact that I wrote a poem to highlight and mark the week.

On weekend last we hit the streets

We strolled down town In our best gowns

And counted down till Purim begun

When we found the shuk

Well we were all pretty shook…

Purim was an experience that I’ll never forget

Eve and Tom’s half marathon

For the past 5 months I’ve been living in Israel. A lot of falafel has been consumed and little exercise has been done. So I’ve made the illogical decision to run a half marathon on March 17th in Jerusalem with my friend Tom.

I decided to run the half marathon after visiting the Western Galilee Region Medical Centre. A neurosurgeon gave us an inspiring talk about the operations he’s been doing to help Syrian victims.

The hospital is in the north of Israel and is a 2 hour drive from Syria and 10Km from Lebanon. They started offering the aid in March 2013. It used to be 100% combat related and is now 85% combat related and 15% combat independent. The types of injury are 30.7% shrapnel, 14.8% gunshot, 23.9% assault, 15.9% blast. The victims have arrived there mainly at the wrath of battle between Assad’s soldiers vs free Syrian army. The hospital treats everyone wherever they come from as the surgeon said ” It’s not for me to decide who I’ll treat. We are sworn to treat the pain. You can not play judge here”.

The hospital treats many patients and recently performed 7 surgeries in 24 hours. Once treated the patients are not required to stay in Israel and can carry on their lives as they wish. During the talk, the surgeon gave us various examples of the surgeries that take place. For example, they recently treated a 23 year old women who was sexually assaulted by the Syrian army who then shot her in the head.

The Western Galilee Medical centre need more funding so that their ward can grow as there are currently only 4 senior staff members and a mere 5 operating rooms. The hospital is doing a fantastic job at treating these Syrian victims and as the situation in Syria is only getting worse, the hospital is becoming increasingly under pressure. The more money the hospital has, the more it can develop and find more efficient ways of treating the Syrian victims thus decreasing mortality rates.

If you could donate, not only will it motivate Tom and I on our run but we will also be very grateful as we believe this Israeli hospital is doing vital work to help the terrible situation in Syria.