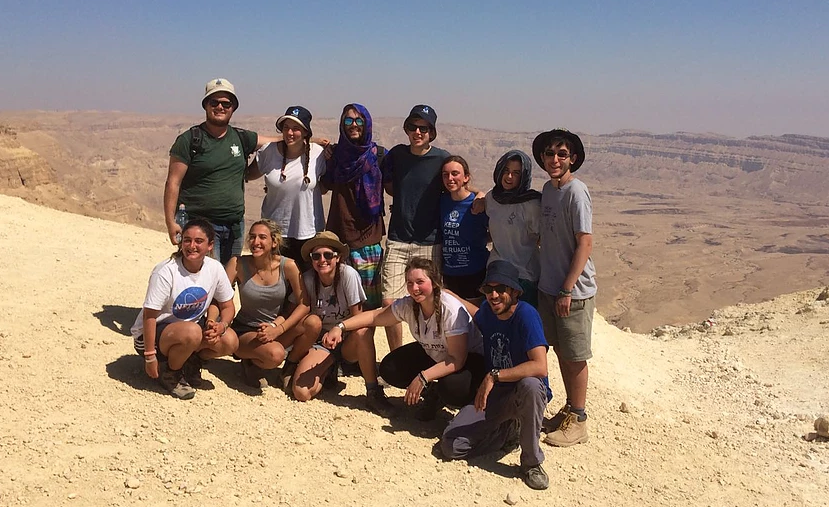 It has been another busy week for Machon. We started the week with a closed Shabbat, meaning that all of English Machon stayed at kiryat moriah to enjoy a peer led communal Shabbat. Kabbalat Shabbat was organised so that everyone could experience a service that reflected their Jewish identities. All the netzerniks attended the egalitarian service and had the chance to learn some new tunes from Noam UK and Habonim SA. The remainder of the Shabbat weekend consisted of peer led chinuch, time to reflect, and a lovely havdala to close the weekend.

On Monday evening Lior kindly drove some of us to a 5 star hotel in order to attended a seminar about the conflict, organized by Masa. Whilst the seminar was interesting, the main excitement for us was the food! After weeks of below average mystery meat, rice, and an awful vegetarian option at kiryat moriah, we finally ate like royalty. As if we weren’t excited enough by the enormous buffet and endless supply of chocolate mousse and cakes, Lior then presented us with takeout trays. The joy in our eyes as we ran to fill up our trays was priceless.

After a couple of days of classes, ranging from leadership to Zionism class, we all woke up extra early on Tuesday in order to visit the Knesset (The Israeli parliament). We all found this trip very interesting as we got to view the conference room in which the parliament sits for all meetings. The arrangement of the seats is in the shape of the menora and the positioning of the press means they face the government co-elation rather than the opposition. We also had an amazing talk from Nachman Shai, a Zionist Union MK. The group had many questions, from discussing women at the kotel to the possibility of a two state solution. Tom says that “it was excellent for me to be able to compare the Israeli parliament to the British parliament I know so well. It was also interesting to see the psychological accountability that was built within the layout of the knesset meeting room”. Everyone enjoyed lunch in the sun in the gardens outside the kinesset.

We then travelled to Belz yeshiva, a yeshiva for charedim. We had a talk from a charedi who studied at the yeshiva. Our speaker had dramatically different views to us, telling us that he thought “the holocaust was retribution for too many Jews straying from Halacha” and that women are merely “partners in the marital home and are for having babies due to the organs they were given”. As you may think, we had many questions for this man who seemed to think that reform Jews were not legitimate Jews. Dan felt that “although incredibly uncomfortable to sit and listen to such abhorrent opinions about our Jewish identities, it was still fascinating to be exposed to such a lifestyle”. Whilst the main synagogue was beautiful, the women were forced to sit behind a metal mechitza two flights of stairs above the main seating area.

One thing I found particularly troubling was that seat allocation was dependent on how much an individual had contributed towards the synagogue. Seats ranged from $1million dollars for front row, to $5,000 for seats near the back. It saddened me to hear that the speaker’s 16 year old son had recently bought himself a $7,500 seat which he will have to pay off over 7 years. I don’t believe that any 16 year old should have to spend this tremendous amount of money on a seat near the back of the synagogue they are a member of.

Many of us found this trip emotionally challenging but equally interesting to see a point of view we are rarely exposed to. I can safely say I don’t think any of the netzerniks will be becoming charedi anytime soon. To contrast this, upon return to kiryat moriah we spoke to a woman of the wall representative. Woman of the wall is an organisation that netzer supports and therefore many of us were very excited for this talk. This was a refreshing way to end an emotionally charged day as we once again felt that we are supported in our move for equality.

On Wednesday we took to the streets of Jerusalem to celebrate international women’s day. We offered free hugs and sung songs to show our appreciation for women and equality.

We’re all excited for another week full of Machon meals and special Purim celebrations.