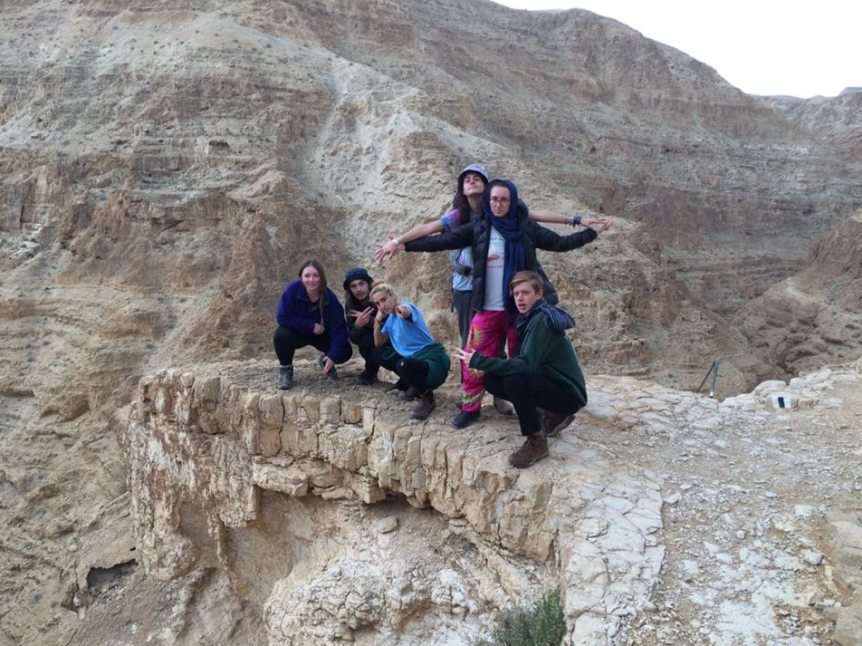 Our first week in the Etgar flat has certainly been a full one. We’ve done such a lot together, learning about Zionism, Judaism, gender and far more than I could list, and the learning has certainly not only been in our structured programs. Personally, in our non-structured time I learnt how to play the game of backgammon and also that I can enjoy drinking cocktails.

I also think we’ve already started to learn a lot about each other (more than we might wish in some instances). I suppose it’s inevitable that, thrust into this strange new world of ideology and hagshama and very dirty floors, we’d find ourselves having new experiences and new kinds of interactions with each other, perhaps more meaningful than we had previously had. But I still reckon that we’ve done a good job so far in creating a positive and supportive environment where people can be comfortable, voice any concerns they may have and just have fun together.

This was particularly highlighted over Shabbat, when we had our fellow Noffies from Machon over. We had a lovely Shabbat service together, had a much-appreciated and enjoyed dinner (thanks Tilda!) and played a few board games. A few of the Machonniks made comments along the lines of, “Is it this nice here all the time?” That was a nice reinforcement to the notion that we’re doing a good job here. Though they have been complaining about the smell a little.

Our madrichim shavua, Joshi and Sara, decided to set a theme for this week, and the theme they chose was ‘kindness’. We’ve been doing what on Netzer camp is called ‘Fairy Friends’ – every person in the flat receives someone else’s name, and secretly does nice things for them (though I sorta blew my cover after the very first thing I did, whoops). I have received pictures of my three favourite Harry Potter characters (Lupin, Luna and Hermione) set over my bed, which I very much appreciate (thanks whoever that was)!

I have been learning a lot, and having fun while doing it, in our structured programs too. We’ve had two Hebrew lessons so far, and while a lot of it’s stuff I’ve come across before at King David School, it is nice to review the basics given that the last time I had a Hebrew lesson was five years ago. We’ve also been learning some fascinating things about binyanim (literally buildings), the vowel structures that most Hebrew verbs conform to, that I never knew before. A particularly enjoyable program was our first Gender and Us class, in which we were split into two groups and each had to raise a child, while progressing through a Game of Life-style board and being presented with dilemmas relating to gender stereotypes and the pressures they put on us.

Another particularly enjoyable session was our first ‘Think Tank’ with Ady. This isn’t a typical class with a set subject matter, but rather an excuse for Ady to bamboozle us with difficult questions (just to be clear, I really enjoyed it a lot). This week, we were asked what gives us the right to educate, mostly in a Netzer context but also in general, and we jumped headlong into moral relativism and whether it holds up as a philosophical system. (Because I’m writing this update, I get to say: It doesn’t, moral relativism sucks.)

It wasn’t just Ady’s class that was hard.  Etgar has certainly lived up to its name of ‘challenge’, but so far it’s been very much a rewarding one. I look forward to making more memories with these lovely people. So this week we started Machon opening seminar. We have learnt about building community and harnessing leadership within the framework.

Then on Sunday I arrived back from the magic moments seminar in Peqi’in with merchandise from the north which everyone was excited to get. I made the beloved 78 to the top of Ben Yehuda and walked to the Etgar Flat and gave over the merchandise and then watched the mighty Grease. I then went back to Machon on the bus and accidentally got on the bus without the others, sorry guys.

I spent the rest of the week being introduce to what to expect from Machon and choosing our lessons for the next four months. Hopefully I’ve made a good decision.

Tonight (Wednesday night) we had a quick discussion with the Shabbat va’ad on how next week’s Shabbat evening service will run with some differences between say us and Hineini (modern orthodox) and we’re still all friends. Hope all is well all around the progressive world 😊