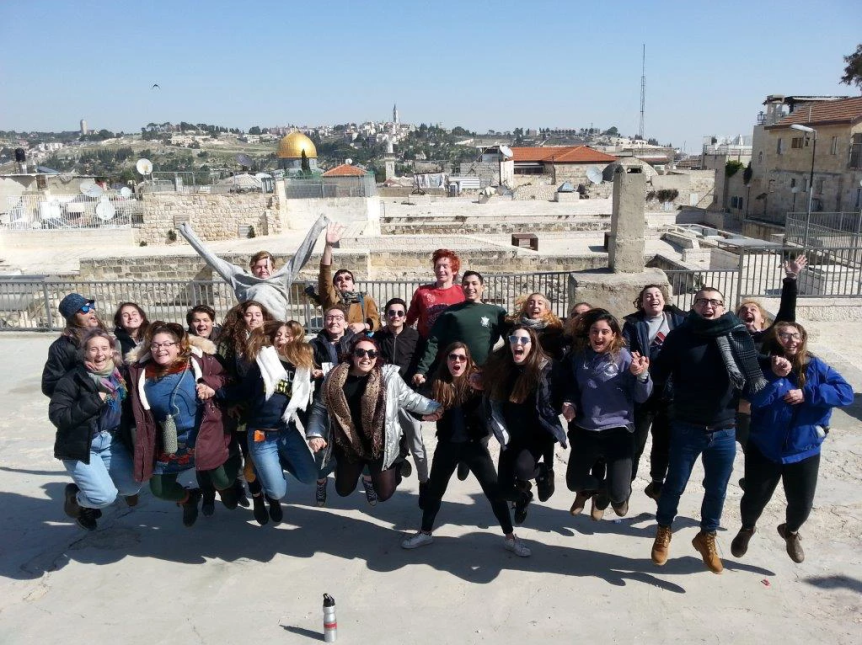 Our lovely shnatties have embarked on the final part of their programme! The shnatties have chosen between Machon, an inter-movement education institute, and Etgar, a Netzer-run communal-living education programme, and have been joined by the Southern Netzer participants from Australia and South Africa! From now on, our updates will include parts from both Machon and Etgar!

So this week we finally got to meet the southerners and start etgar and machon! Beforehand we had a long weekend as a big Shnat Nof group. This involved circus skills, a Hebrew test and a very insightful tour of the old city of Jerusalem. We also went to Kol Haneshama for a lovely kab shab and engaged in a Shacharit service the following morning run by Becky, Emma and Asha. So many mixed emotions about being all together! Happy to finally meet everyone but it also means we are already so far through shnat. For the rest of the day we had a peulah and more kef involving havdallah and closing tekkes (ceremony).

Our etgar opening seminar started with a small hike due to the awful weather we are experiencing right now. We went to a few locations to see some incredible views and then headed to our campsite in which we stayed all 16 of us inside a Bedouin tent! We had a really in-depth and incredible discussion about kvutsa (group) which resulted in a few tears but nonetheless everyone on etgar is incredibly excited for the kvutsa we will have for the next 4 months.

The following day (Monday) we did a hike that would be considered too dangerous in England, Australia and South Africa! We were basically climbing down a rock face during the torrential downpour. A few of us ran up the “cliff” and raced to the front for BANTZ. We were then all pretty wet and miserable for the rest of the morning until we went to Ein Gedi and saw the ruins of an ancient synagogue that proved that egalitarianism existed back around the time of the second temple as there was no segregation of genders. We, being netzerniks and very proud feminists, were extremely interested by this. In the afternoon we had a very difficult but productive discussion about the rooms for etgar which, after two hours, was eventually all sorted. The rest of the day was more logistical stuff followed by a beautiful ma’amad surrounding a campfire in the evening.

Coming back to beit shmuel as half of a big group felt incredibly weird, especially because this is to be our home for the next 4 months. We spent the morning and some of the afternoon in a session with Amit, doing lots of communication exercises which definitely helped us to bond more as a group. We were then FINALLY let loose in the etgar flat and we all moved into our rooms. It’s so nice reading all the notes that have been left on the walls, some as far back as 5 years ago! Slightly overwhelming however.

After settling in, Charley Katan (a northern Ma’ayan shnattie) gave us a session on religion and philosophy. Very insightful but also scary because big questions AHHHH!! In the evening we had a scavenger hunt kef run by Sara and Becky which was hilarious! My group lost but nevertheless we all had fun!

Today, we started with a different kind of scavenger hunt lead by Ady and Danit, in which we had specific tasks and riddles that would gain us points. Altogether a hell of a lot of kef! This afternoon we had a session with Rabbi Haim Shalom on kosher food which was very interesting and discussion provoking.

All in all we’ve had a great week and can’t wait for the next one to start!

This week the Netzer group was split in two as we delved into our separate programs of Machon and Etgar. Ten of us, a mix of Australians and Brits, headed towards our new home at Kiryat Moriah in Jerusalem. We went through enrollment before jumping on a bus towards Nitzana, a youth village and communal settlement in the Negev desert, adjacent to the Egyptian border. We spent the four hour ride meeting and getting to know the people from Habbo South Africa, Betar Australia, Noam England and Hineni Australia, that we will be spending the next four months with.

When we arrived, David Palmach, the director of Nitzana, spoke to us about the importance of what the community does in regards to the education of bedouin and refugee children as well as growing fruit and creating life in an otherwise barren desert. We ended the night with dinner, a bonfire, a guitar and some classic sing alongs.

The next day we were allocated a shinshin who led us through a collection of group bonding games and activities, followed by a long and strenuous bike ride through the desert that left everyone’s bums sore for days after. Later on three more shin shin gave up their time to talk to us about why they chose to defer from the army for a year and go on the Nitzana which opened up a very interesting discussion about the cultural differences in people our age across a range of countries. We collectively cooked a Potjie (lots of raw food cooked in a pot over a fire) over a couple of hours and exchanged some inter movement tunes with each other.

We spent our final day of Tiyul learning about sustainable energy and building in the desert landscape and innovative ways to collect water and keep the temperature down in summer. We then spent some time doing Outdoor Training which involved team bonding exercises through a low ropes course and activities.

We bused back to Machon and were allocated rooms. We were given the rest of the night to unpack, settle in and socialise. Our first proper day at Machon we were given a talk by Ilan, the director of the English speaking program, about taking opportunities and making the most of our time here. This was followed by a split into our chavurah groups to go over detailed timetables and class selections. Everyone struggled picking their classes from Zionism to Global Studies every one sounded amazing.

It’s been a bit of an adjustment being away from the other half of our group and being thrown into an environment of people from all over the world with such a range of views and opinions. However I think that it is this intense space that will force us to grow and develop our ideologies as leaders and as people.

I am really excited for the development of friendships and knowledge that is to come over the next four months.