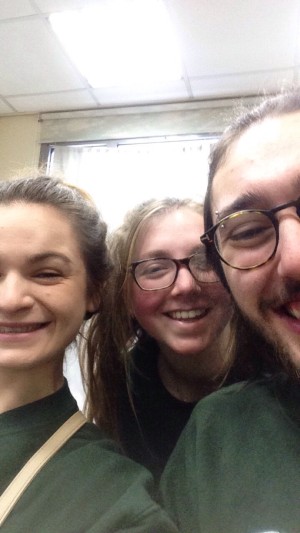 The Veidah Olamit (World Congress) of 2017 was one that I think will be remembered fondly. We had representatives from every snif (branch) of Netzer, which included 13 different countries all around the world and we even had a representative of Colonia de CIP, from Brazil, as their movement deliberates over their membership to ours. These representatives gathered in Israel to discuss ideological and practical matters related to the world-wide movement and it’s future. As most of us hadn’t met the majority of Netzerniks there, the first day consisted of meeting and greeting, with little time to meet people properly we were thrust into a workshop named ‘Community-What? Why? How?’ by Steve Israel. This workshop I felt really nailed down the importance of community and people interaction, which was extremely topical at an event with an aim to strengthen the international community and work together more. Following this was an extravagant opening ceremony; to honour Maoz, the mazkir of Netzer Olami who has worked tirelessly for 20 years, and ended in a stand-up comedy show by Benji Lovitt, a funny man who possibly didn’t know his audience. Luckily for us, we were graced with Shnat Nof North’s presence for the first two days of the Veidah, and when they left, leaving Becky and Asha, representatives of LJY-N and RSY-N respectively, the classroom assigned felt much smaller, but somehow much cosier. The day after the opening ceremony, the first full day, thanks to the tochnit co-ordinators, Orit and Rodrigo, started with breakfast and a morning siesta. We then sat in a circle to have a ma’amad led by our representatives from Noar Telem (Netzer’s snif in Israel) in which Amit taught a new tune for the shema, which she must have regretted as she was mobbed afterwards with requests of the chords and for her to teach it. The day was also filled with 15 minute presentations with questions for each snif to show what their work from the year has been, including camps, size and structure. The day was concluded with a viewing of a Black Mirror episode about the possible defects of technology in the future, this led to a thought-provoking discussion about how we can use technology in our daily lives without it taking over. I think it would be fair to say that at this point, the sniffim had joined well, and there was a definite feeling of closeness and comfort, which made everyone there feel like they were in the perfect Netzer environment.

On the third day, we rejoiced to learn that the morning siesta was part of the daily tochnit, rising with smiling faces, the Veidah Olamit representatives took to our first asepha, put forward by Netzer Olami, of ‘Whether Netzer Olami should have a vision for the ideal boger/et’, in this asepha we spoke about characteristics but also of the future of the movement, and if we are creating bogrim, where is their place in the world. An amendment was passed to only have inclusive language in the vision. The motion had no abstentions, 13 for and 1 against. The rest of the day was filled to the brim with a workshop by Anna Posner about the relationship of communities and Judaism, lunch at the shuk on pizzur and a kabalat shabbat at Kol HaNeshama run by Noar Telem. This fantastic day was brought together brilliantly by an RSY-N led oneg, where we taught some classic tunes and a long-lasting game of Kabadi, in which friendships were cemented and kef was had all-round. On the Saturday, after breakfast and a siesta, the netzerniks had our shacharit, originally planned to be at the Kotel, but enjoyed in the comfort of Beit Shmuel. After another luxurious siesta, we were back in the zone for our second asepha, this one was put forward by LJY-N and was ‘To reaffirm feminism in Netzer’, this sparked a hot debate of what reaffirming would mean for the movement and how it could be implemented, equally if this would just be something to pass for the sake of it, as it did not come with an action plan. Eventually RSY-N came up with an action plan of changing the last bullet point of the ‘Our Values’ in the platforms to;

As a movement that identifies as feminists, and recognising our ability to counter the society we live in, netzer believes that each snif should actively promote and respect those within our movement and community. Achieving this change is best realised through education in Netzer.

This was accepted as an amendment and the motion was passed with 10 for, 4 against and with no abstentions. After lunch we learnt about some modern Jerusalem communities, including the Cooperative, a shop that mainly sells food to customers who are also members. To be a member and therefore to shop there, you must volunteer there once a month minimum. This cooperative idea was really cool as we saw how prices can be lower when not injected with capitalism and how all their food was vegetarian and ethically sourced! With that the next asepha was upon us and now the motion from Netzer Barcelona, ‘There should be a meat option at all Veidah meals’ which of course does not mention meals bought with own money or pizzur. This asepha underlined how passionate some are when it comes to this issue and the discussion was interesting and intense. However, when underlining the power of choice, it was mentioned that this comes down to a matter of informed decision making, something that some sniffim believe you must be informed on this issue to vote and if you are informed you can see the problems with the meat industry. The motion passed with 5 for, 4 against and 3 abstentions. After a Russian-style Havdallah, we all set off for Habibis, the pub that we had gotten accustomed to while in Israel.

On Sunday, and our last full day in the Veidah, we awoke for breakfast and found our seats for our unfortunately final asepha put forward by Noar Telem. ‘To stop using the Orthodox version of the Aleinu’ something that RSY-N has already done. The discussion started with a comment from our very own Naomi, who attended last years Veidah swell, that this motion had been put forward last year, but deliberated until this year so that sniffim had all the necessary information to vote properly. This meant that the discussion was less about the practicality and logic of using a reform version of the Aleinu, and more about why some sniffim could not adhere to make such changes in a movement that was not necessarily led by them. Even after an amendment was accepted of using a reform version in youth-led services and on machanot, the overall motion still did not pass. On that note we were whisked away to Tel Aviv for the day, having a rainbow tour which identified all the LGBTQ+ places and information in TLV and meeting Arab youths in a youth centre that we learnt had a similar structure of madrichim as Netzer, but was also available to kids to go to after school every day; one madricha even told us of how her mother complained how she was never home because she was always here! What i loved about this community was how bright and passionate they seemed, all the kids there seemed to go because they loved it so much and the friendships they had made were obviously strong even at first glance. With that we had a pizzur dinner in TLV and got on the bus for the evening chilled bus ride back to Jerusalem. The Monday was, I say this with a heavy-heart, the last day of veidah, with breakfast and our morning siesta out the way, we had a final workshop by Orit and Rodrigo about Netzer as a world-wide community, which sikkumed all the ideas of the workshops and how they were relevant to us, a peulah that was firstly, brilliantly ran, but also very thought-provoking, I can’t speak for all that were there, but Veidah really underlined for me, the importance of the world-wide community and how weak it currently is, there are so many ideas coursing through us and all we have to do is voice them for the discussion of implementation to begin. I would like to thank all that attended Netzer Veidah 2017, it was the perfect environment and it has filled me with an energy to do.