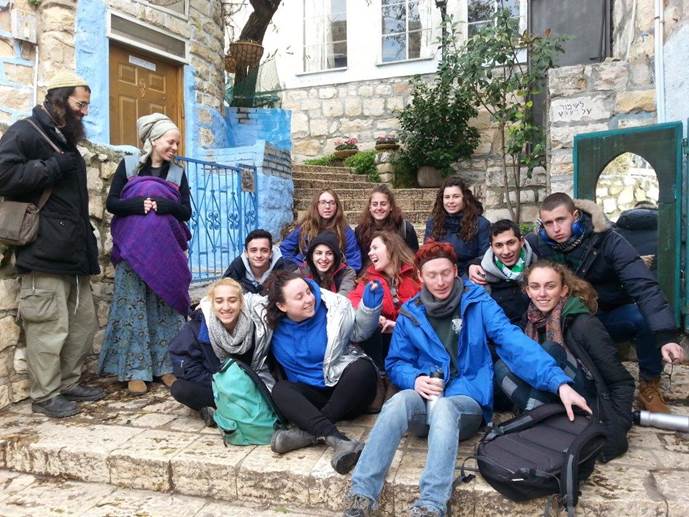 This week was our first full week back since returning from our Chofesh adventures. Those who volunteer in the Western Galilee school finally carried out the project they’ve been working on since they got here. The kids “flew” to England, went to Glastonbury and met the Queen. According to Josh: “It went down an absolute treat”. That day, the four of us who volunteer at the Kerner School received an absolute beauty of a message from Amir telling us that we had the day off meaning we could lie in, It didn’t go down that well with the rest of the group.

Every Tuesday is Yom Tiyul, and this Tuesday we started off by traveling to Mount Meron. We were told it would be cold so obviously we ignored this warning as we are on our gap year in Israel meaning it can never be cold. When we got off the coach we were all very confused to see a layer of snow covering the ground. Some people were more excited than others so decided to make snow angels (E.G Jayme).

Because of these conditions our hike took us longer than expected but nobody fell over and we got some great pictures of the views from high up. Tuesday was a very busy day for us because straight from the hike we went to Tzefat and had a very interesting tour of the city and learnt about their Kabbalistic beliefs.

We then went to the Faculty of Medicine where we learnt about the treatment of Diabetes. Even though this isn’t everyones biggest interest, we all got to hold an Australian Tree Frog which means more pictures and more likes on Facebook.
A few weeks ago all of us travelled to Braam to meet 18 year old Israelis who are part of the Mechina programme (Preparation for the army). On Wednesday it was our time to host them for four hours. This wasn’t an easy task as there are 50 of them compared to 13 of us, but it went extremely well and we were sad to say goodbye to them after. It is always easy to amuse people when there it is a sunny day and we have a football.

Alongside these planned activities we are planning on having a House Sheshbesh (backgammon) and Spit tournament whereby the winner of both tournaments will play each other to be crowned the ultimate winner and will win a prize of some sort. Sometimes we have to put ideology aside and focus on KEF.