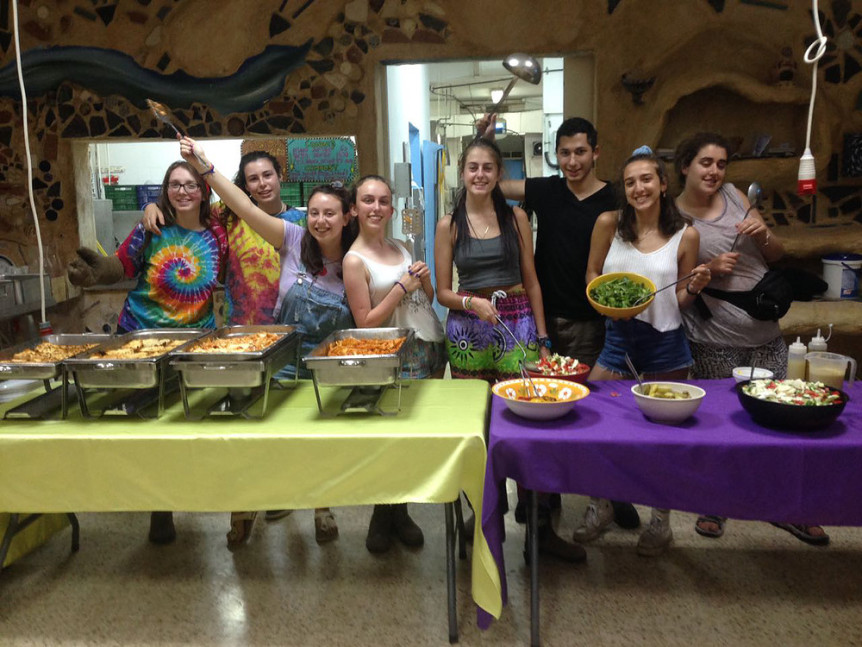 It’s been another busy week on Lotan.

So in the morning on Thursday we did landscape gardening with Daniel and that was a  very fulfilling experience. We worked really hard at it and we all felt like we accomplished something in that session. After lunch we had a processing session on the US election, and a discussion on what we can do to ensure issues we feel passionate about aren’t disregarded. It was a inte resting to hear other peoples opinions on that topic. After that we had potluck preparation and we all cooked a dish together to bring and it was very enjoyable to cook as a group and have a communal experience in the kitchen.

On Friday we had a session with Alex on the lunar and solar calendar. Tom said “it was his favourite session of the week” because it was very eye opening and how all the Jewish festivals are linked together. The LJY shin shin from last year popped in for a visit and Eve arrived to Lotan so finally northern Shnat Nof was complete. We had a session on this weeks parashat. Elinor said “it was interesting discussing how Sarai’s rights were abused in the Lecha l’cha portion, in light of Trump’s victory despite his blatant sexist opinions”.  We then had Shabbat dinner and Sara, Ilan and Jess did toranit and it was a very fun experience.

Saturday we just relaxed in the bustan and some people went to host families and others cooked communally in the bustan kitchen and it was very a lovely day and evening.

On Sunday Sara and Emma ran a ma’mad and that was successful. We had a fun theatre workshop with Debbie which included us being blindfolded and someone leading us around the Eco kef space. We also had our second talk we Michael Livni about intentional communities v a community. In addition we had our regular Sunday Hebrew lesson with Leah.  To finish the day we cooked dinner for the kibbutz and that was very a rewarding experience.

So on Monday we started with our usual ma’amad and chores. We then had a very interesting session with Adam on the theoretical side of mud building; why we build with mud; the key steps involved and we were shown multiple images of buildings made entirely of natural resources. We then smoothed out the final coat of mud on the nursery wall which was extremely satisfying as we have now completed building up a wall which will permanently be a part of the kibbutz. After lunch we had a permaculture session with Alex. “It was so fascinating how a topic about ecology and the creation of community can be related to such important topics, including feminism.” – Elinor Knox. After dinner that night, the boys had a mens’ sharing circle run by Adam. “being sceptical at first, it ended up being a really warm and friendly . environment for us to talk in.” – Dan Apter. Whilst the mens’ sharing circle was happening, the girls had a talk altogether about any issues we were having and general women talk.

Tuesday was not a good day for Jess as she woke up with very painful tonsillitis…….
after our morning ma’amad, we had another session with Mark on community, this time talking about paradigms. “Mark made us look at global events, break them down, and look at how it’s possible to shift alternative paradigms into new ones. I thought it was really interesting.” – Tom Smith.

Tuesday afternoon we had free time so we all decided to go to Eilat together on the bus. Some people got piercings, some went to the beach. We all went to the shopping centre to have a nose around which was great fun. Small groups went off to get different dinners before everyone went to get ice cream and go off to the market in Eilat to buy nice jewellery and Israeli clothing. We left Eilat at 9:00 and everyone went to bed as soon as they got back…big day tomorrow!!

We woke up at 5:30 this morning to be ready to be taken to the date plantation at 6. We spent the whole morning in the date fields, giving back to the kibbutz. Up until now it has almost felt like we have been breezing through and not really giving anything back. After today however, it definitely feels like we are doing something for the community. We spent the whole 8 hours putting the cut off date branches into two columns in each row so that the tractor could come along and shred it all up, making it usable to protect the ground from the suns heat and to stop weeds growing around the date trees.
After a very well needed lunch at 2, once we got back to the kibbutz, we had a good couple of hours of free time in which people showered and napped before we went to have dinner with some of the younger kibbutz members.

All in all another GREAT week on Kibbutz Lotan. Signing off, Jess and Sara