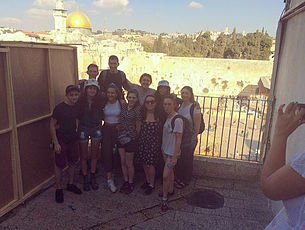 1. Welcoming in the Shabbat and our shnat journey
The first Shabbat away from home was always going to be an emotional one. From Swindon to South London we all are used to observing Shabbat in different ways. For some of us going to shul was an irregularity. For others it was not having dinners with our families that marked the start of a change in our lifestyles.

Thankfully the community of Kol HaNeshamah welcomed us with open arms. The walk took just under an hour each way. This meant we turned up for Kabbalat Shabbat a bit sweaty, slightly out of breath and completely in awe of the beautiful streets and breath-taking sunset of Jerusalem. The kehilla of Kol HaNashema is the second largest reform congregation in Jerusalem. It was therefore a bit suprising when us Netzerniks made up a large chunk of those present. The crowd may have been small but the sound was mighty. We recognised a few of the melodies but hearing the pronounciation of real Israelis was a treat. “It was reassuring and exciting to experience a progressive community in Israel”. For Asha, Kol HaNeshamah offered the prospect of having a haven for prayer for our return to Jerusalem. In a country full of surprises and odd customs, we’ve found a spot of peace in the turmoil.

2. Southerners shacharit / easing in (wall of Hagshamah)
On Saturday morning a few of the current shnatties from Southern Ma’ayan lead our first Shacharit service. It was a very special experience, in an exceptionally special location, with incredibly special people. A particularly prominent moment was when Ilana, Asha and Elinor each read a section of last week’s portion, Vezot Habracha, from the Torah; “When I read from the torah it felt more special than back in London because we were actually facing Jerusalem!” (Ilana).

Thinking of where we were for this service was a truly wonderful thing. And the location, atmosphere and people surrounding us, all contributed to a unique and meaningful service. Even though we occasionally fumbled over the words it was inspirational to see the fluency and passion with which the Ma’ayan shnatties prayed. Hopefully by the end of our Shnat journey we will have connected with Tefillah in the same way. I know we are all grateful to the southerners for teaching us a new version of Mi Chamocha, which we are excited to introduce to our respective movements!

3.Tel Aviv street art tour
On Sunday we travelled a few hours West from Jerusalem to an area in Tel Aviv called
Florentine. The area was significantly different to the sites we had been surrounded by
over the past days. We met our guide, Niro, who was a “true Tel Avivian” that specialised in Israeli street art.

Street art covered the walls, buildings and signposts on every street we turned onto. Being privileged North London Jews this did strike us as a…. less pleasant area than where we are used to, but the things he showed us were not just “graffiti”; rather creative and innovative pieces of art. During the tour many of us realised deeper meaning to the seeming scribbles on the walls and I think we now consider the people who created them true artists.

Max thought “It was really interesting to see Tel Aviv from a different perspective. It was completely different to any other tour I’ve been on”. Some of the pieces we saw were original, creative and made strong political or social statements. It was exciting and intriguing to glimpse into the individual agendas of many street artists – Real life people, with stories, statements, thoughts and feelings, expressed purely on the walls of this incredible city.

4. Jerusalem guided tour
The following day we ventured into the Old City of Jerusalem. Having been so close for the week, yet so far from it made many people even more excited about going. Touring the city was enjoyable for the group – Learning about the history and exploring the Christian section was particularly interesting.

However, visiting the Kottel was a conflicting experience for most people in the group. It is safe to say we can all appreciate it being a wonderful place with such history and culture surrounding it. We can respect it as a central symbol of Judaism. But it definitely doesn’t cater to our values as a religion. Perhaps its due to the separation between men and women, or that people aren’t able to/are being forced to use religious items such as kippahs or tallitot. Becky felt her ability to pray as she enjoys was compromised – “I get a lot out of praying as a kehilla, which you are obvious not able to do at the wall”.

The conflict of this experience came more apparent when we visited the Egalatarian section after – having access to only a slight proportion of the Western wall felt unfair. It was hidden and to be entirely honest, felt more like a seating area than a holy place.

4. Simchat Torah
As a group of teens who’ve just showed up and don’t know where to go to have a boogie around the Torah we felt we wanted to mark simchat torah but were a bit unsure about where to go. Predictably, we took to facebook. We found that a service was being run by pluralist group Nava Tehila. Nava Tehila focus on nigguns and beautiful melodies with short phrases (perfect for those of us who’s Hebrew is worse than a toddlers). Set in the beautiful courtyard of the Jerusalem nature museum, the ma’amad offered the chance to experience circling (hakafot), dancing and singing around the Torah. The tunes varied from angelic to jazzy but united the group in celebration.

Finally, it made sense why Jerusalem is so holy. “To be entrusted to not only hold the Torah, but joyfully dance with it, in the centre of the community dancing and singing around me was a huge honour, and a very special moment which I will hold with me for the a long time.” (Jayme)

5. Sikkum
To conclude this big, bright and busy week, we reflected. Finishing where the week started, in the glass dome on top of Beit Shmuel that overlooks the Old City of Jerusalem.

We used the time to find our own space. Our own thoughts. And our own memories. Looking back over the past week it was clear how quickly it’s all going. Whilst it feels like we’ve already been on this adventure for a long time, the days are flying by. It is clear we need to actualise the phrase ‘carpe diem’ throughout this journey to make the absolute most of this once in a lifetime opportunity.

Although we have experienced some difficult moments this week, we have only grown stronger. The harder points have only highlighted how our respect, co-oppertion and comradery is growing each day. Tom thinks “after an intense first week I am now much more comfortable and excited for the great memories yet to happen over the next eight months”.