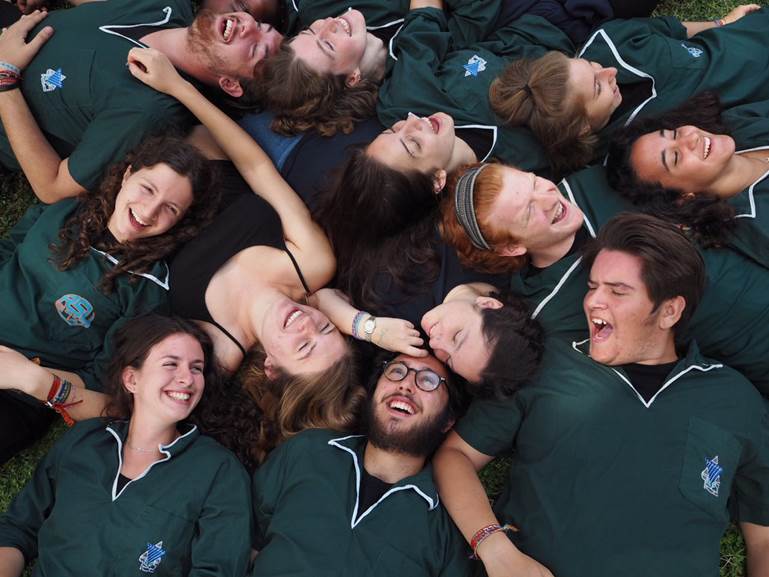 It feels extremely surreal to be sitting here writing this particular weekly report. It’s nearly 10am on the last day of Etgar, and I’m typing at a computer in the Netzer Office (something I’ve done a lot this week), feeling very comfortable and at home, although in the back of my mind there’s a constant reminder that it’s not home for that much longer. I’ve been on the planning committee for this week’s Sikkum Seminar, and this week has certainly contained elements which represent almost every aspect of our Etgar. We’ve had a ma’amad at least once a day, we’ve all ran educational or fun programmes for each other, we’ve recreated our favourite meals, we’ve made a lip dub, we’ve heard from some of our favourite teachers, we escaped from secret rooms, and we’ve cleaned. We have cleaned the flat like no one has ever cleaned a flat before.

But aside from the logistics of what we’ve done this week, I think there is a lot of value in me using this platform to describe what it feels like to be a Northern shnattie, and seeing the end date (and the airport) in sight. It’s funny, because as I write about knowing that our time is coming to an end, I think there’s a large part of my brain that simply refuses to believe it. Even though I know that in 2 weeks I will be thousands of miles away from this place, I still feel that I have weeks and weeks left on either side of me. Even though I know that in two weeks, the majority of the people who have made this experience so absolutely life changing for me will be scattered around this planet – some nearer than others, but some literally on the other side of the planet – I feel closer to these people than ever. A small part of my brain is annoyed at myself for loving these people so much, because if I didn’t love them this much I wouldn’t be so afraid of how much I’m going to miss them. But I like to silence that part of my brain, because I know that thought is stupid and I am so infinitely grateful and feel so privileged to have had an experience like this at all.

Are you ready for some clichés? On reflection, Shnat, and specifically Etgar, has been the most character defining thing I’ve ever been given the chance to do. I feel like that’s the best way I can sum up my feelings right now; I can’t quite think of the words I need to express this feeling. But I’m heading into Shabbat b’yachad and Shnat Sikkum week feeling a lot of love, a bit of sadness but a lot of gratitude.

I’m not even sure how to write about my experience of Etgar, No matter if it’s now with all these fresh emotions and experiences and knowledge, or in a few months or years’ time when I’ve had all the time in the world to process it. I’m not sure I’ll ever be able to describe the essence of the experience, but I can tell you that Etgar has given me a framework for understanding how I want to live the rest of my life. We became so much more than just flat mates – we were an intentional community, committed to ideology and creating experiences that fulfilled what we believe. It’s impossible to comprehend how much I learnt about Israel, Zionism, Judaism and people in general, and moreover Etgar gave us all a platform for expressing all the things we learnt. Most http://improvehearingnaturally.com importantly though, Etgar has made me understand the way I want to live the rest of my life, through my experiences with communal living and the power that this incredible group of people has given me.

I haven’t written for a while but trust me, it’s definitely not because of a lack of inspiration. Just as an example, I am currently writing this post laying on the bank of the Jordan River – if that’s not inspiration then I don’t know what is! My mentality in my last 2 months since I’ve written has just been to go out and experience as much as possible. Unfortunately that has meant that in the down time that I do have – I mostly spend sleeping.
I’ll give you a quick run-down of events to catch you up.
In the past two months I’ve…
– Celebrated my birthday! I went to the Dead Sea for the weekend and then on the day I went to the  beach in Tel Aviv and then went to an amazing restaurant for dinner that night.
– Heard a talk from and then met Martin Luther King Jr.’s son
– Celebrated the many holidays that are this time of year including Yom Hashoa (Holocaust Remembrance Day), Yom Hazikaron (the Israeli Memorial Day), and Yom Haatzmaut (Israel Independence Day).
– Recorded a CD at a professional recording studio
– Had my last classes with the program I’m on
– Visited Ramallah with JStreet (the de facto capital of the West Bank)
And these are just the big things! To say the least, my last months in Israel have been packed with adventure and memories.

About a week ago we started the goodbye weeks. These are the last 3 weeks of my time in Israel. Saying that it is taking 3 weeks to say goodbye seems ridiculous! However, when I think about it, it took us around 3 weeks to say hello so why should we spend any less time saying bye. The first week of goodbye was the last week of classes. I said goodbye to all my teachers, had our final discussions, and moved out of my dorm. This week is saying goodbye to the other programs that I have been living with for 4 months. To do that, we have gone on a 5 day trip to the north! We are hiking, kayaking, touring cities in the north like Tzfat and Nazareth, and just being with each other. On Thursday I’ll have to say goodbye to those 40 amazing humans and start my goodbye weekend to the southerners in my program. That weekend we will celebrate the Jewish holiday of Shavuot and hug and cry. Then on Sunday I’ll leave for Kibbutz Lotan with the original group of 15 other people who I started this journey with. We all started this year on Lotan together so it’s fitting that we will end it there. I will be on Lotan for 4 days and then will spend my last night in Jerusalem before leaving for the airport on Thursday morning.

It’s crazy to think that it has come to the time in the year that I have to say those things. Those are my next and last 8 days that I have left. Yes they will be packed full of hard goodbyes but those goodbyes are with people who constantly inspire me and have truly impacted my year. I’m so lucky that after this year I’ll have good friends in every corner of the globe! I better start saving up for those many trips to Australia, South Africa, and England!