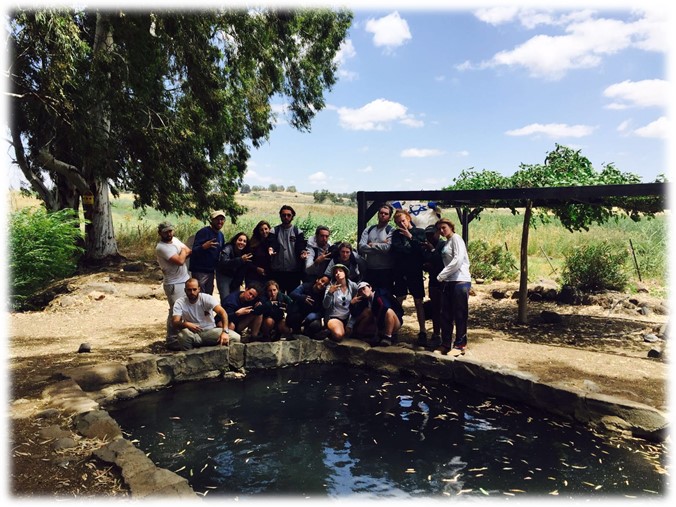 A week in places An amphitheater in Latrun for the Masa Yom Hazikaron Ceremony, Tuesday evening. A half hour journey that took two. A car park full of tanks and guns and handsome male soldiers. Sad violins, moaning cellos, a vision of royal blue shadows and smoke. Military instructions, calm and slow, commanded us to sit to attention, and watch, listen, watch, listen, to the show. We were silent for fifteen minutes instead of one, just to be sure. Piled up platitudes, heartrending harmonies. It’s about Their Legacy. It’s about What They Left Behind. It’s about Their Kind Smile and Their Sense of Humour. It’s about Their Passion for The Land. It’s about how he never really belonged in Philadelphia, His Heart was Always In Israel. It’s about the yeshivah program established in his name, the charity set up for her cause. Their Legacy was to Inspire You to Love Israel in the Same Way. Maybe Masa is continuing the Jewish people and the state of Israel. Maybe if this is the only way to do it, its better than the alternative. Maybe.

Har Hertzl, Wednesday morning An uphill climb past jammed cars and buses. Cramming onto ramps and stairs and ridges and stone and metal. So much green, shade just out of reach – so much stone. Crumbling, ancient Jerusalem stone framing graves that are so new. Bodies crammed against the railing, white t-shirts scrunched against rough kaki uniforms, sweaty arms folded in, shoulders touching, eyes looking outward. On my right, three yeshivah boys in kippot, in front of me, three men with guns, to my left, a modern orthodox Australian, a socialist Mexican, a cynical, secular South African; in the distance, three soldiers at the grave of their friend. The siren sounded and Israel paused; I have never felt air so thick and full with thoughts and emotions and dreams and nightmares.

I was very grateful to be on Har Hertzl on Israel’s Day of Remembrance, but in the back of my mind, I knew I was literally taking up the space meant for members of this nation. Regardless of my investment in the State of Israel as a Jewish nation, the bottom line is that I am not Israeli, I am not part of the society. My minute’s silence is muffled and grey and obtuse, a cloud. Theirs is piercing and painful like direct sunlight.

Machane Yehuda, Wednesday night We danced to pop songs in the center of the market boulevard, dark and breezy and lonely and happy. And in those moments I felt like I was truly celebrating Israel’s Independence, in the street, in Jerusalem, with strangers and new friends.

Gaza border, Yom Yisrael – Tuesday A day of contradictions. We disembarked the bus and strolled like tourists to view Gaza city on the horizon. It was Emerald City – vivid green and dry yellow fields of wheat caressed a mirage of tall black poles, below messy, grey skyline. We sat in an idyllic park to listen to Yotam speaking, accompanied by a symphony of gunshots from a nearby military base. We went to Yotam’s mother’s house, a beautiful, tranquil house in a leafy moshav and ate garlic hummus whilst she explained that there is a Gaza tunnel on either side of her property. We then traveled to Sderot, (‘boulevards’), also known as the ‘bomb shelter capital of the world’. After hearing about the astronomical rates of PTSD, stress disorders and trauma, Panni and I went to the shuk to experience a lively and bustling community, where a woman buying nectarines next to me made my day with her friendliness and warmth. We were given a talk by a musician who explained how Sderot has been compared to Liverpool in the 60’s as a rich melting pot of creativity and music. A week of music, of hills and markets. So similar, so different, all parts of a mindboggling whole.