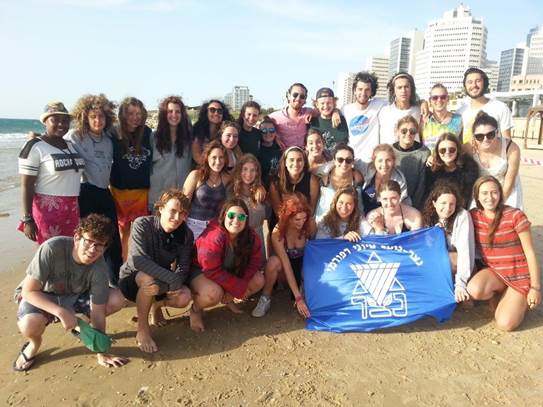 Hello everyone! We’d like to take you brought some of the highlights of our week as part of Mechinat Etgar! We have had an emotional week, what with Yom haShoah and Yom hazikaron in the same week

This week, we travelled to Kol hanshama together, to come together for Erev Yom haShoah to remember the victims of the Holocaust. We were then fortunate enough to see the effects of the siren in Zion square the next morning and to see everyone’s world stop dead in its tracks during such a usually busy time was very surreal and something we know we’ve only ever witnessed something like that once before. The power of stopping to remember really touched the kvutsah (group) to the extent that we all talked about it for the rest of the day, the sound of the siren, being the start of a fascinating and memorable day as we went straight from the square to Yad Vashem, where we were met with a stunned silence by the groups already there as the bridge we crossed both physically and emotionally into the underground museum. We quickly walked through the exhibition learning about people experiences throughout the Shoah. This lead fittingly onto the children’s museum because the contrast of the facts, pictures and stories of the museum, to the abstract memory of the one and a half million names that were recited as we walked through a dark room, lit by reflections on reflections of candles, flickering as we walked past them perished during the holocaust. This contrast, highlighted the way different people remember the holocaust and their interpretations. We ended the day with a talk from a survivor, which was fitting way to end the day.

After the weekend, Sam and Sammy were the madrichim of the week and organised a time on Sunday night to talk about the etgardeology, with which we split into groups again to talk about the aims of writing out our ideology. Due to Sam and Sammy, organising the first activities in the morning before classes so that we could make the most of our time, we started Monday morning with a ma’amad in which we all sat in a circle, facing outwards and then spontaneously sang songs! For Yom Tnua we went to Tel Aviv to the beach, playing Northern vs. Southern football or as they embarrassingly referred to it as soccer!  And then we went swimming, had a squad photo and watched the sunset while singing Charley and Ella’s ma’amad.

The next day, the morning activity was a memory game which led us to classes and then we had our first rehearsal of the performance we are putting together- Square: a geometric identity which went well! The Yom hazikaron ceremony at night was beautiful, regardless of it all being in Hebrew, the names and pictures made some of us cry, it was a lovely moment.

Shalom friends from around the world,

This last few weeks have been exceptionally busy for us machonikim, as we joined with the rest of the country in commemorating the losses of many lives. On Wednesday, after hearing different accounts of IDF experiences, we attended a masa ceremony for Yom Hazikaron, remembering the fallen soldiers and victims of terror attacks here in Israel. This day was especially poignant to me as two elderly women had been stabbed in an act of terror just that morning. I had woken up to a message from our beloved Orit, asking us to confirm our presence on campus and then started the day with an announcement that we were on lockdown. This unfortunate timing spoke volumes to me; here we were, about to hear of the role of the IDF in Israeli society, when it was painfully obvious that they are vital here and protection is greatly needed.

The masa ceremony was very large, dramatic and at points, rather emotionally manipulative, using death to evoke nationalism. A large bulk of the ceremony was hearing 6 testimonies of 7 people who had died through terrorism or in active duty. I was moved to see the strength of their families and the wonderful words that were spoken about them. However, I felt that some of the tragedy was taken away by the focus that their deaths had almost been necessary to create the state of Israel. I was also incredibly shocked by how young the victims were, being 18, 19, 22 and 32. The youngest 18 year old was a masa participant, just like us, who was simply on his way to volunteering. Having also been that volunteer in Israel when we heard of the horrific death of Ezra Shwartz, it was painful to think how innocent he was in his death. As we all stood together for the siren, I thought of how sad but immensely powerful it was that a whole nation was thinking and remembering altogether. How confusing it is to have a nation for the price of many soldiers whilst being aware that this immense sacrifice bares us the responsibility to support and contribute to that same nation.

On a lighter note of the week, on Monday afternoon, we abandoned our usual schedule for Yom Tnua and headed to Tel Aviv beach. There was swimming (until shouted at by lifeguards), football, watermelon and a few Nava Tehila renditions in classic  Ma’ayan fashion. It was really wonderful to have the chance to chill, have fun and just be with each other, which was what we all needed. As the last few weeks of my shnat are upon me, I had the opportunity to think of all the amazing people that had surrounded me over the year. After a shakshuka and chips dinner, Ella and Charley ran a ma’amad focused on mindfulness, giving us a chance to focus on the final few weeks ahead and what we wanted from them. The combination of amazing people, the sea and some good old Ma’ayan singing meant it was a lovely afternoon and evening.