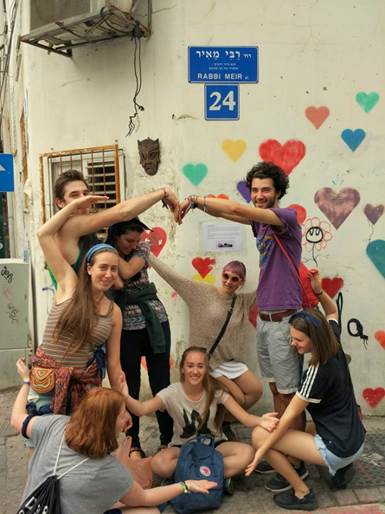 Here on Etgar, most of us spent the weekend at the Hebrew Union College. The programme consisted of various sessions, including a notable one led by the Rabbi of Kol- Haneshama, one of the largest Reform synagogues in Jerusalem. He spoke to us about the difficulties that the Reform movement faced in its beginning days, including various boycotts of the movement by political parties such as the Israeli Labour Party. To hear the journey that both Kol- Haneshama and the Rabbi himself had been on was truly inspirational. However, a few days later we had a talk from Anat Hoffman, leader of the egalitarian ‘women of the wall’, on the state of the prospective progressive section of the Kotel showed that despite Kol Haneshama’s success, there is clearly still a long way to go with regards to recognition and respect of the of the reform movement in Israel. Despite the recent landmark vote authorising the creation of an egalitarian area of the Kotel, actualisation of the promised area has stalled, largely because of pressure on the government from orthodox groups.
In other news, our latest creative project, ‘square: a Geometric identity’, is coming along nicely. It is s musical, written by Miranda and Charley, about a Square (named Quad), who wants to be a parallelogram, but comes up against anger and misunderstanding from his family and community, who don’t understand Quad’s desire to be anything other than he is. Whilst being a lighthearted and fun performance, there are many parallels (if you’ll pardon the pun) with transgender issues, something we hope to raise awareness of through the play. The script and score are well under way, and we hope to perform the production at the beginning of June.

Gender class is a chance for us to explore the issues of sexism and feminism through a Jewish lens. We dissect articles written by Jewish feminists, homosexual Rabbis and study biblical texts. Our educator, Shulamit Magnus, is an inspiration, as a result of her heavy involvement in the revolutionary movement ‘The Original Women of the Wall’; fighting for the rights of women to pray freely and equally at the Kotel.

We recently learned of the conflict between ‘The Original Women of the Wall’, versus ‘The Women of the Wall’, from a passionate lecture by Anat Hoffman, one of the founders of Women of the Wall. Anat explained her current compromise, fighting for the legitimacy of an egalitarian section, to be governed by the movement, in which all people would have the autonomy to practice their Judaism freely. This compromise involves the acceptance of the current Haredi synagogue that is the Kotel, which is monopolized by the orthodox movement. Shulamit however, is strongly fighting for the rights of women within the Kotel, reminding us of the value that can be found in passion and perseverance after 27 years of fighting for Jewish women’s rights. This conflict has brought into question the importance of compromise when fighting for social change. On the one hand, Anat has made a compromise that strays from the pure goals of the Women of the Wall, which may achieve these reformed goals in the near future. However we wonder if this compromise leaves behind the women who wish to pray separately to men at the Kotel. Shulamit is fighting a pure fight for the rights of the women at the Kotel whose rights are currently being denied. She is unwilling to compromise her aims, however does not see success in the near future. This gender class with Shulamit is stimulating, challenging and inspiring, and our knowledge regarding feminism and Judaism has grown exponentially allowing us to engage in a more informed way, with our Judaism.