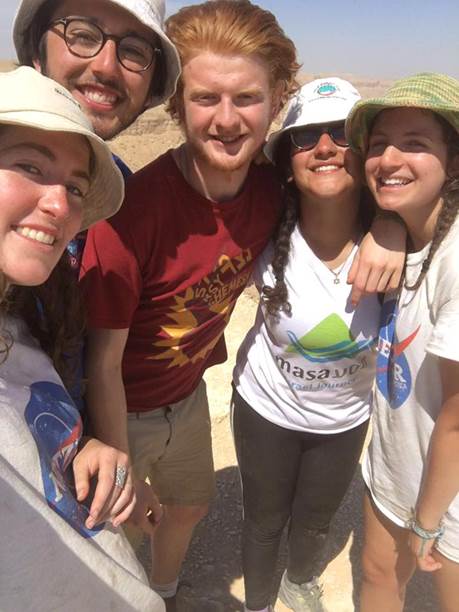 Wednesday we return from our tiyul in the small crater, however we didn’t have long to relax as we had to prepare for purim. All Thursday we went up and down Yaffo street to find our costumes as well as back in the flat some of us created our outfit from scratch. All dressed up we headed out to the ‘maskarave’, which was a night to forget. However the party didn’t end, only having a few hours sleep we then headed out to a street party which was great. Although purim was over the fun didn’t stop. We invited the machoniks over for a ma’amad and kef.

Sunday then came and after all the fun we had to get back to lessons. we start with our weekly clean and then have our insperational Gender and Us lesson. We ended the night with a short celebration for Rochelle’s 18th birthday. Monday we have our Yom Tnua, however this week without machon as they were on their tiyul. To start with we had a Peulah run by Ady followed by a group bonding peulah run by Nancye and Sophie Ph. To end the day we had a great ma’amad run by Sammy and Tommy where we wrote notes to each other saying things like what we appreciate about them or why we like living with them. For dinner we had a professional chef come and cook us a delicious three course vegan meal and then ended the night with a few games of mafia which was a lot of Kef.

On Tuesday morning instead of our session with Ady we had a guest speaker to come to talk to us about sex education, we then learnt about three different naratives about the war of independence. Israeli, Palestinian and Druze. We then headed to communal effort which was fun like usual. We came home to a delicious dinner cooked by Joel (ex-shnattie who has come to visit) and helped by Daniel and Nancye. it was then followed by an intense asepha.

Wednesday we have lessons as usual however we had another sex education lesson instead of the guest speaker after to find that England are in the final of the T20 world cup for the first time since 2010 where they beat Australia by 7 wickets. Barney also arrived back from England tonight.

Early Sunday morning, the Machonikim headed off toward the north of Israel on the Pioneers Tiyul to learn about the first, second and third Aliyot – the continuation of our studies in Zionism class.

Our first stop was Zichron Yaakov, and the town’s cemetery. We visited the graves of those who established the Moshava (settlement) in 1882, and their descendants. We learned about the many challenges that these first settlers faced, particularly the children. Many of them perished from malaria or the hardships of the winter of 1883. Some families immediately moved away as result of the despair they felt, whilst others stayed and built on the land – not wanting to leave the kids buried there alone. After this, we walked the old cobblestone streets, lit by old-fashioned street lamps, on our way to the First Aliyah Museum. We admired the restored homes of many families such as Rothschild and Aaronsohn, whilst learning their stories and impact on the land. Our study of the First Aliyah ended with the museum, which summarised everything we had learnt that day through an interactive video tour about a religious family moving to Israel from Romania – a representative sample of the makeup of the First Aliyah. Our first night finished off with a talk from Muki Tzur –  a historical expert on the second and third Aliyot. He spoke in an optimistic and passionate tone about the youth that left their home countries to establish a socialist life in Eretz Yisrael. This helped us to understand the transition from the First Aliyah to the Second, which focussed less on religion and more on youth autonomy.

The second day started with a tour of an agricultural training farm where great Zionist philosophisers such as A.D. Gordon and Hana Maizel worked the land. Maizel was of great interest to our group, as she pushed for women’s equality in the chalutzik movement – starting a women’s training farm. Our next stop was the Kinneret Cemetery, where we visited the graves of important chalutzim (pioneers) of the Second Aliyah, including; Rachel (famous poet), Ber Borochov (pioneer of the socialist Zionist movement), and Berl Katznelson (philosopher). After lunch, we hiked along the path that leads from Rosh Pinah to Tzfat, admiring the beautiful scenery and ended the day with a free night in Tiberius.

Our third day saw the arrival of the Machonikim at Kibbutz Ifat, to explore the Third Aliyah Museum. It was interesting to learn about their kvutzah (group) dynamics whereby there was no private property and an intimate relationship with all the members. Even couples could not marry as this would change relationships within the intentional community. They often had to have a “primus” (an extra member of the kvutzah, usually unwanted) live with them in their tent to stop the bond of the couple from overpowering that of the kvutzah. Other issues surrounded that of the children and who they would belong to, in a space of no private property. We then went to an urban kibbutz in upper Nazareth, called Kibbutz Mishol, whereby the members of the kvutzah live with a communal bank account, in the same building and have different volunteer and paid work roles within the community and greater city. This mix between the traditional kibbutz lifestyle and modern lifestyle, was created in response to the changing Israeli society and the modern world. This was an interesting idea to end our tiyul on, as we were able to examine the role of chalutzim in a modern society.

Growing up in the diaspora, with no physical or emotional links to Israel has meant that my connection to Zionism has been limited. It has been difficult for me to come to a conclusion as to what I believe in relation to the state of Israel, especially when I have a 5-hour class about the conflict every week taught by the same teacher (Steve Israel). I feel I cannot condone many acts by modern Israel, which impedes on my Zionistic beliefs. However, this tiyul brought a new light to Zionism in my mind, especially learning about why people of the Second Aliyah came to the land. I found the socialist views of Third Aliyah particularly intriguing as I had mixed feelings toward the idea of sharing absolutely everything – to the extent of not being allowed to give your own child a gift as this would be a private good, and your child was in fact a ‘kvutzah child’. All in all, the trip left me thinking about how the idea of being a “chalutzah” can fit into my own life.