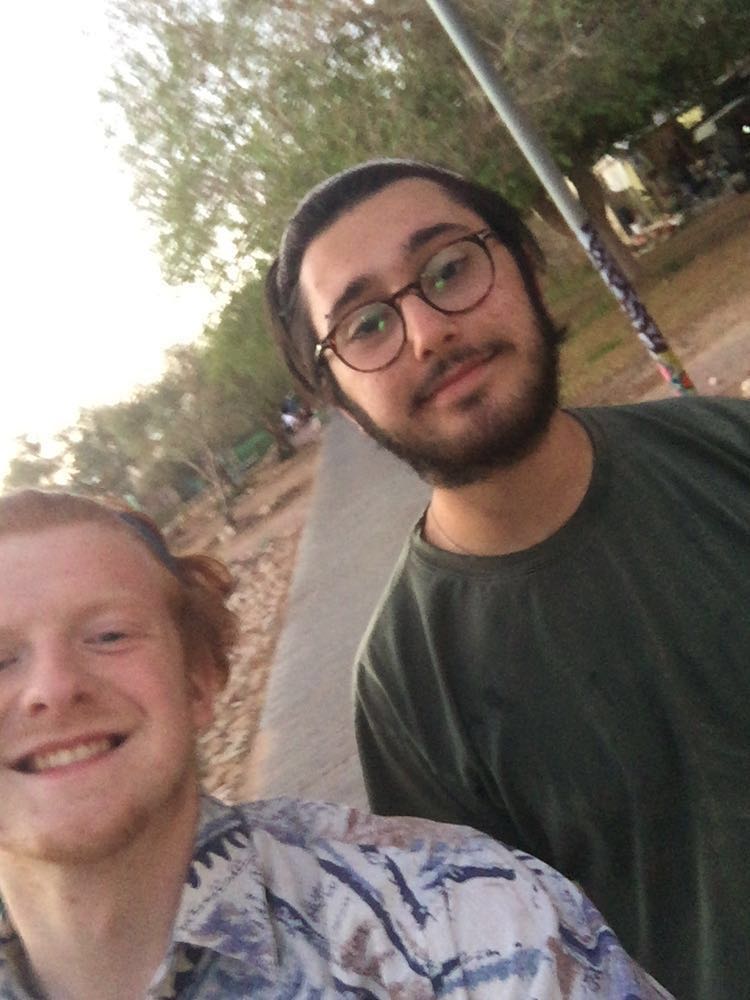 Since last Thursday we have had a huge event on Etgar. As one kvutsah (kehillah achat) we all travelled to the beloved kibbutz Lotan, where the northerners spent the first 5 weeks of Shnat, to bathe ourselves in sunshine, sand and ideology. We left Jerusalem at about 6pm on Thursday night to arrive at Lotan bus stop at approximately 9:45, we then marched towards the gates of the kibbutz listening to a mix of backstreet boys and the proclaimers, two favourites within the flat. When we arrived a few of us went for walks around the kibbutz and a few of us went straight for disc golf, a truly magnificent sport. On Friday morning we were asked by the kibbutz to work on the dates field to earn our breakfast.

We arose as early as 5:30am, although the kibbutz was already a wonderfully pleasant temperature, and we headed to the fields. We were working from 6am until midday, we started by weeding all the plants around the date palms and finished by rounding the donkeys to be counted, the day gradually got a lot hotter but fortunately the date palms granted us welcomed shade.

The reason we were at Lotan is because as a kvutsah we have been asked to rewrite an ideology for Etgar and also potentially Netzer! So this weekend was dedicated to the initiation of that project and labelled – ideology seminar! We started the seminar of with a chinuch peulah on all of the Netzer snifim (branches) respective ideologies and also Netzer Olami’s ideology. We then decided that in groups we would attempt to work towards a complete restructuring of Netzers ideology. We had several hours over the weekend dedicated to this.

On Friday night we had our first only Etgar kab Shab in a dome lit up with purple and green, Charley even taught us the bar’chu she wrote a couple of weeks ago! And on Saturday morning we had a shacharit in the bustan. Just before we headed back to Jerusalem, we had a “Netzer Australia” havdallah, with a wonderful bonfire!

On Sunday morning we were all completely exhausted but also very excited to return to our amazing classes! As well as returning to our routine, we began colour wars! A week long activity planned by Tommy and Ayanda! We were split into groups within our rooms, the teams were blue, yellow, red and green. Each team received a flag and activities happened throughout the days so that the teams could earn points! So far yellow is in the lead but the results won’t be completely revealed until after the final activity on Thursday night!

This weekend on Machon, we were all over the place. Some of us went to Tel Aviv (Kabbalat Shabbat service on the beach with the addition of various shnatties’ family members!!), others went to Karmiel, some to Ra’anana, and many spent time with family.

On Sunday we began Limmud week. This is a week outside of our regular classes, consisting of peer-led sessions about our respective passions and interests. These continued on Monday, and then we had Yom Tnua with our friends over at Etgar, where the Northerners had a session run by a representative from J-Street (an American organization promoting a two-state solution) and the Southerners had a session discussing the next part of their program (life goes on without us?!). Some Etgarians then ran a session on the different streams of Judaism, which was both educational and enjoyable! This was all concluded by a beautiful ma’amad led by Orit, themed in correspondence with International Women’s Day.

Tuesday was a rollercoaster of emotions, as we visited the West Bank for our weekly Yom Israel. We were given a talk from a man living in the Jewish settlement of Ariel – the largest in the West Bank. We then went on a bus tour of the city, followed by visiting the city’s university. After this we went to Shilo, where we saw the archeological remains of the Mishkan – the 3500 year old temple built by the Jews when they were wandering through the desert.

Wednesday we had another day of Limmudim, which was another amazing opportunity to get to know one another better, and learn together in a forward thinking, pluralist setting.