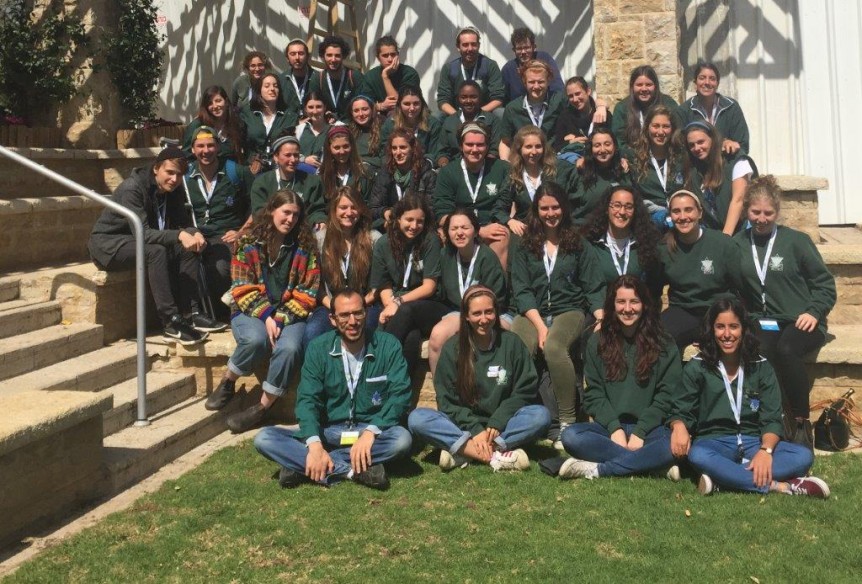 Since we last updated you all, we have had an extremely busy week on Etgar. To finish our week on Thursday we had Siyur which this week consisted of a Cultural Tour around Jerusalem, taking a look at the city we live in from a slightly different angle than we have before. We went to places such as the first neighbourhood outside the Old city, pioneered by Moses Montefury from Hertfordshire in the UK as well as a film school and a really cool theatre in a cave. After visiting this Theatre we decided we wanted to use it to put on our musical production that aims to raise awareness of gender diversity and the rights of the LGBTI+ community.

We had an open Shabbat meaning everyone was free to do as they like, although many people decided to visit our local progressive synagogue for Kabbalat Shabbat before being hosted for Friday night dinner at our friend Yael’s house. She is currently doing Shnat Shirut (Pre army national service) with Noar Telem (Israeli Netzer). On the Saturday we used all our Shabbat spirit to get some well needed rest, with some people going for walks, watching films and reading on the grass outside our flat.

We started Sunday with another amazing lesson with our Gender teacher, Shani, who the week before had led a beautiful workshop on Niggunim. She revealed she had composed our favourite tune to the V’ahavta and written our most popular song, Hanach L’ergalai- leaving us utterly star struck. We learned about the different types of Niggunim and how it brings people together through music due to its repetitive nature. We were able to split into groups to formulate our own Niggunim. It was very evident how unifying music is, bringing our group which is from all over the world together.

On Monday the whole of Shnat Ma’ayan went to a Masa event which was based around the BDS movement and how to deal with it when we return to our communities. Masa is the organisation that oversees long term programs in Israel, and brought us together with other gap programmes for the day. Our first talk was from Daniel Goldman from Gesher on ‘When values conflict in the family’. It was about the varying opinions on Israel within the Jewish community which was very interesting, especially since his point of view was one we don’t often see which obviously sparked some disagreement amongst the audience. After that we were put into groups mixed with other programmes, to talk about what we had learnt and also about the different challenged and issues we had faced in Israel. Following this we had a talk from Neil Lazarus, which bought a wave of emotions, opinions and questions from the audience, although it was extremely engaging. The final part of the day was also very emotional with groups travelling into different places in the West Bank. One was a factory that had suffered because of the actions of the BDS despite having many Palestinian workers in it. Another was from an inspiring and moving women who spoke about her experience being a victim of a terror attack around 10 years ago in Israel, with a message for peace. Finally the third group visited Gush Etzion to meet with a Jewish settler and a Palestinian who were working together on a grass roots project which involves bringing together both peoples to talk about the conflict and work together on possible solutions.

Tuesday night most of Etgar found themselves in the comfort of a random persons home on King George Street. The reason we were there was because we stumbled across an event on Facebook called ‘Jews Hating Jews: A History of Institutionalised Racism in Israel’. This talk depicted the gap between Ashkenazi and Mizrachi Jews in the holy land, stemming back prior to the foundation of the state. It was such an eye opening talk, exposing us to the deep roots of racism that currently exist which really are never spoken about. It has inspired us all into informing ourselves so that we can inform our Chanichim when we return home about the Sephardic people and their history.

This week we had a closed shabbat at Machon, run by the incredible Shabbat team where they had planned out a Netzer and Hashy (Hashomer Ha’tza’ir youth movement) Kabbalat Shabbat and then a Hineni Kabbalat Shabbat service, where they had set up a middle section for men and women to sit together, which showed us how enthusiastic Hineni are. The next morning they gave us the options of going to a morning service at some the nearby synagogues then came back and where introduced into to different movements traditions of chuggim, where we could play dodgeball with Betar or meditate with Habonim Dror. Then in the afternoon we had seuda shilshit where we were given fairy bread, which for all Australians was amazing, but for everyone else was weird and gross. Shabbat then finished with Havdallah run by Habonim Dror South Africa, where they introduced us to their way of doing Havdallah which involved 3 hours of dancing.

Monday we all went to an all-day event run by masa as all of Machon with Etgar where we spent the day discussing BDS, and being told how it was bad and we should fight against this, the only thing is, is that none of us knew what BDS was, so we struggled with having negative information forced on us about how we should hate something that we didn’t know what it was. Although during the day we did get to go on different tours where we meet different people that have been effected by the conflict in different ways. At the end of the night it was agreed by all the Machon people that one of the best parts was the food as by being at the masa event all day we didn’t have to have Kiryat Moriah food.

On Tuesday we got up early to leave Kiryat Moriah to go to a small development town south of Jerusalem called Yerucham. It started by getting an introduction to the background of the town and having one of the older members of the community talking to us about when he first came to the town and what it was originally like. We then went to the youth centre and got to meet one of the active youth members of the town and one of the ex-members of the youth centre who has done his army service and now helps run the centre. From there we went to someone’s house where they made all of us an amazing lunch and then told us about their experience coming to Yerucham. We then ended at the robotic centre where we had a person in charge tell us what the kids do at the robotic centre and the difference doing robotics has had on the town.

On Wednesday when we had La’Omek (in-depth class) where we all went to different things depending on our class. Culture went to Tel- Aviv; Conflict stayed at Machon; and for my class of religion we went to a nearby Arab area. We got to learn about Islam by talking to one of the women of the area, then went to a mosque and got to learn more about the religion and its culture.