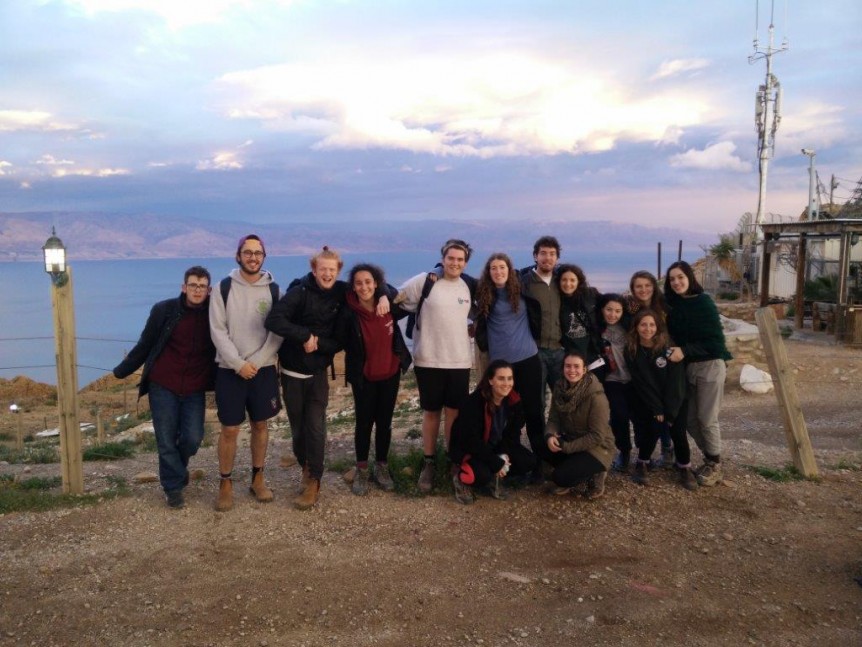 Let us begin with our first Shabbat together as Etgar! We had a lovely time singing our favourite tunes with the Machon-niks at the Kabbalat Shabbat service run by none other than Rosa and Mia. It was so nice and refreshing to be brought back together as kvutsat Ma’ayan after a long week of being on our respective programs.

Everyone had a relaxing Saturday, settling in to what is to be our home at Beit Shmuel for the next 4 months. There is so much incredible Netzer history in this flat, as can be seen in the writing from past shnatties all over the cupboards and beds here. This makes living in the flat a really special experience, feeling constantly connected to Netzer.

Gender & Us was the name of our very first class on Sunday morning. We were all engaged and ready to learn! Our teacher, Shani, discussed with us the origins of feminism and gender stereotypes. This was followed by a class on tikun olam, where we debated whether or not the practice of tikun olam is realistic. The third class we had on Sunday was Hebrew, where we split into a class of those who Hebrew, and those who don’t. Everyone was feeling tov meod after a big day of class!

Engaging classes followed on Monday. We shared in an interesting conversation in our chinuch and hadracha class on a moral dilemma. Then we had a fascinating discussion in our Jewish thoughts class. We studied a passage from the Zohar, a book used primarily in kabbalah, about what it means to study Torah with your heart and your mind.

Next in our schedule was Yom T’nua (movement day) in which the Machon-niks came to Beit Shmuel and together we had an intriguing lecture on t’filah and what it means to pray with intentions. Then we shared in a spectacular dinner, provided by none other than the exquisite Holy Bagel. Following this we had a ma’amad and then split into groups and cooked dessert together.

Dude, you wouldn’t believe the thought provoking discussion we had with Ady on Tuesday morning about the place that education has in today’s society. Then, we had an amazing introduction to our class on Israel’s relationship with the Middle East.

Adventure and anticipation was in the air on Tuesday as we came to our new project, a small community on the outskirts of Jerusalem. Here we volunteered for about 2 hours of communal effort in their beautiful garden area. We helped build terraces for planting and weeded their flower beds. We look forward to working with and collaborating with these amazing people for the next 4 months.
Regrettably, this brings us to the end of our weekly report.

So this week has been our first full week of Machon, which has meant we have stated our classes and we are all starting to feel Machon as our home away from home.

Over the weekend most of Netzer stayed in, except for Shabbat where we went to Etgar and we ran Shabbat for them. Although the first thing we did was run around the whole flat to see everything that was on the walls. After the beautiful Shabbat service we all hung out for a while until we eventually had to go back home. For all of Saturday we mostly stayed in and hangout as this was our first down time of the week. Sunday morning all the Hashi (Hashomer Hatza’ir Movement) people arrived which was fantastic unless they were in your room because they came in at 5.30am. Later that morning we finally started our classes which I believe we have all been enjoying.

On Monday we had movement time, so we all went to Beit Shmuel and got to spend some well needed time together.

On Tuesday we had our Yom Israel day, where every week we leave Machon. This week we had a tour of the City of David then went to the Kotel. This was an interesting experience as we all had different opinions of being in the gender segregated areas and being in the egalitarian area. A common opinion of Netzer people was that we felt a lack of community in the gender segregated area and felt pushed to the side and hidden by the current location of the egalitarian area.

Although everything aside this week has been great and we are having and incredible time.