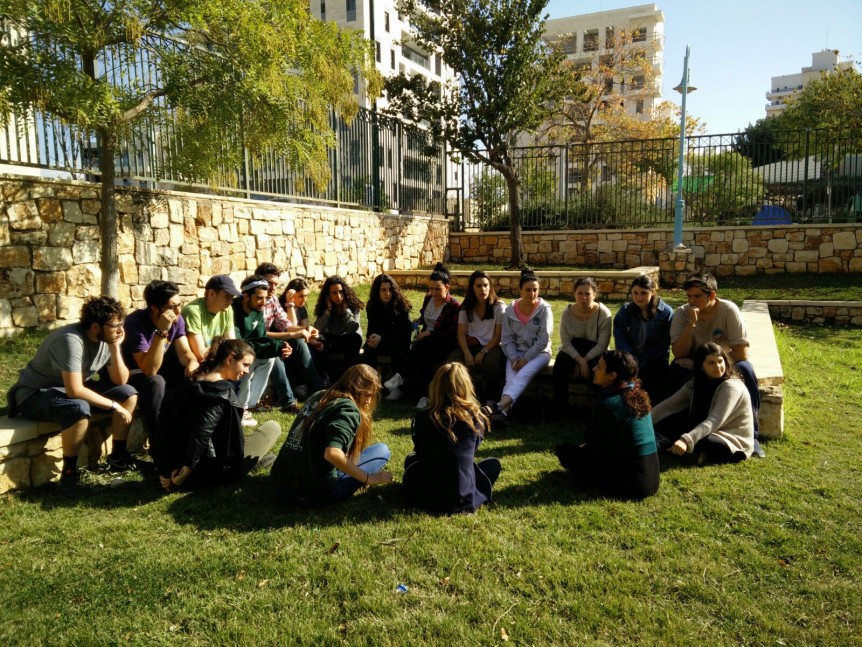 Last Tuesday the Northern Shnatties packed up their belongings from Karmiel and moved to Jerusalem. In those 7 days, we said goodbye to one of our kvutsah members, and met 17 new ones. To say that it has been a big transition is an understatement.

Our first couple of days in Jerusalem were mainly spent on reflecting about the amazing 2 months that we had in karmiel. We shared stories about our volunteering, reminisced about the programs that we led for each other, and of course sang our favorite songs. However, thrown into the mix was the fact that we were also meeting the Southern Shnatties for the first time. Expressing how it felt to meet the Southerners for the first time is really hard. But lets just say that when we first saw them, the entire hall was filled with screaming and hugging.

After having a couple of days to settle into the idea of having 17 new people with us, we began Shabbat B’yachad on Friday night, thus officially combining Shnat Ma’ayan North and Shnat Ma’ayan South into simply Shnat Ma’ayan.

Shabbat B’yachad was filled with many “get to know you” activities, a really interesting limmud about vegetarianism, a trip to the old city of Jerusalem, and so much more. However, for me one of the most memorable moments from last weekend was the kabbalat shabbat that we held. For the Northerners, Shabbat services have become a comfort and a really powerful time for us. That’s why we were all so excited to share it with the Southerners. When I was sitting in the circle and we were singing Halleluyah, something hit me. I was looking around at the people who I had spent the last 3 months with, and the people who I was about to spend the next 4 months with. Everyone seemed so content at that moment. I had gotten used to singing with 17 other people. Now we had more than 30 voice all joined together. At that moment, all the stress and bad feelings that I had in the past week just went away and I realized that at that moment, each and every one of us was exactly where we were supposed to be – together.

Over Shabbat B’yachad, I think it is safe to say that we all got pretty close. This is what made finally splitting into Machon and Etgar so bittersweet. While we were all sad to split, the excitement about our upcoming tiyul (trip) and starting Etgar was overwhelming! Soon enough, 14 of us were on our way to the desert! I think the phrase that I head the most over the tiyul was, “Guys, Etgar means challenge!” This was partly because we were hiking and also because there happened to be a storm in the desert at the same time! However, staying true to the phrase, we completed the challenge and hiked to caves, waterfalls, ancient ruins, and even had a ma’amad in the freezing cold. It was a challenge but there is no doubt that it was a great way to break the ice and bond our new Etgar Kvutsah.

Back in Jerusalem, today was the first fully settled day and I can say that it definitely was not boring. Ady and Danit organized a Jerusalem-wide game of “The Amazing Race.” So we were split into teams and spent the whole day running around Jerusalem trying to complete different tasks. It was a great way to start getting a feel for the wonderful city of Jerusalem.

As we head to the end of the first week of Etgar, I can say that if the rest of the 4 months are even partly like this first week, it’s definitely going to be a challenge but it’ll be a challenge that I truly don’t want to miss out on.

when I first arrived in Jerusalem, it scared me. Everyone was orthodox and serious and smug and that distinct quality I can only describe as Israeli. The footpaths filled with purpose and resignation and long skirts and black and guns. The roads metaphors for the Israeli psyche – fearless, forward, fast – unashamedly so.

Machane yehuda was a watercolour in shades of unease. Walking into the bustling market, Nancye mentioned the stabbing that had occurred there three weeks earlier. I noticed the Israelis, going about their business – non-descript wives and husbands, smugly calm shopkeepers, old people in wheelchairs nearly keeling people over in their brashness.

We walked on the main street, past endless convenience stores and tourist stores and juice stores. it was like no matter how fast we walked we could never keep up with the people of this city. A tram almost run over Max and that set us off and we looked around and noticed the guns and the silence and people were sprinting with such urgency that we panicked until we saw then running for that tram.

We walked back with our arms linked and heads vigilant and minds trying to begin to comprehend this city.

And then we went to the old city, somber security guard in tow. And concrete turned to stone, bustle turned to quiet, fastness turned to wonder, but the sense of danger stayed.

But then standing amongst muttering and bowing women, my nose kissing the Kotel, I found the bit of stillness I didn’t know Jerusalem had secretly stored in those stones.
All the calm of the city seemed to be locked away, barely reachable but at the same time, overpowering.

We wept at the Kotel, filled with the 2000 year old wishes of the Jewish people, its rough edges smoothed by human touch, its vastness divided by tradition.

But really, how do I write about Jerusalem, the focal point of Jewish literature, a city that has inspired more words than it can fit upon its streets?