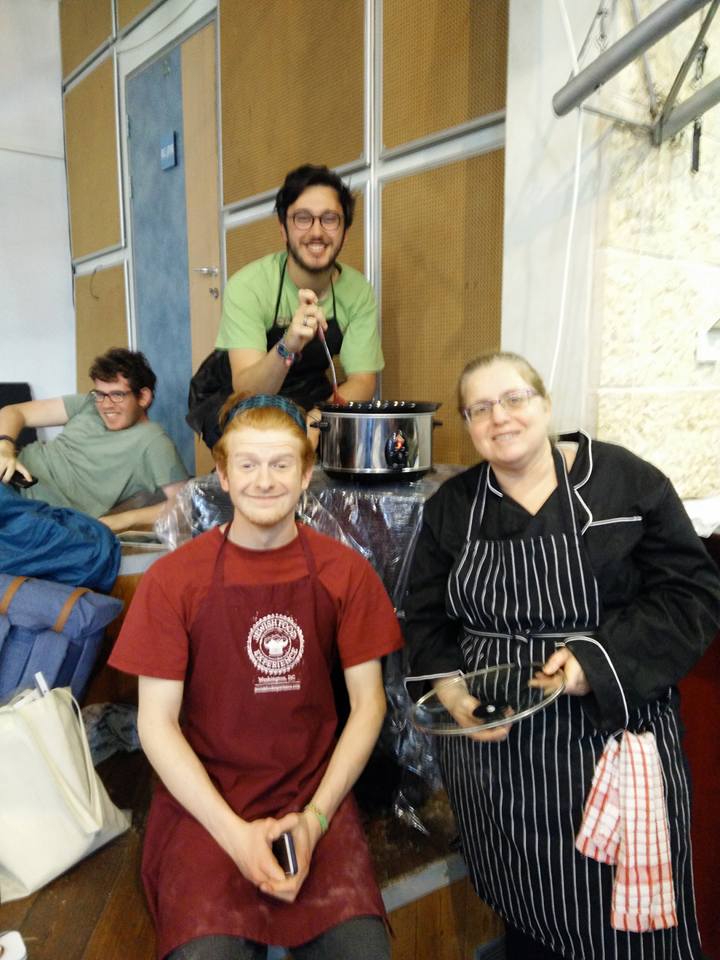 You rejoin us on New Year’s Eve, no less. During the day, as a change from our usual Thursday tiyul (trip), we had a lovely cooking lesson here in Karmiel in which we baked bread, made soup and melted and froze chocolate into funky shapes, all of which proved delicious despite our culinary inadequacies. We then went home and prepared for the much hyped Shnat Maayan New Year’s Eve Bonanza. This event kicked off with a Big Fat Quiz Of The Year style kef, leading into what was described by some as being not unlike a Year 8 Disco due to our chance acquisition of a fully functioning smoke machine, along with music from our resident DJ Kesef Katan (Lil’ Money) (Small Change) (Charlotte Katan).

Over the weekend we caught up on some much needed rest. Chloe and Sophie Petes ran a beautiful kabshab service on Friday night, and on Saturday we had peer-led limmud sessions on mental health and the ALYN Hospital in Jerusalem. For our potluck dinner on Saturday we were joined by a rather inspirational young man named Shai, whose epilepsy and  cerebral palsy don’t stop him from living a full and active life here in Karmiel. Huge amounts of food were prepared by both houses, and we ended the night singing some of ours and Shai’s favorite songs all together.

Sunday spelled a return to volunteering and ulpan (Hebrew calss). Both continue to provide us with new and exciting challenges, while it has been suggested that our newly-learnt ability to say crucial phrases such as “I don’t speak Hebrew” and “sorry I don’t understand” effectively brings a conclusion to our Hebrew education, because, well, who needs any more than that in a foreign country, right? On Sunday evening we watched a fascinating documentary called The Gatekeepers, as per Amelie’s recommendation, in which former heads of Israel’s Shin Bet security service revealed personal accounts of the biggest events in Israel’s short history, documenting the pivotal moments in the conflict with the Palestinians. A line that particularly stood out towards the end of the film was that “victory is simply the creation of a better political reality”, which seems to ring true throughout the history of the conflict.

Monday was another full day of volunteering, while the evening brought a kef activity led by Sam and Charley whereby snakes and ladders was combined with comical activities that had to be completed in order to move along the board.

Our Tuesday seminar this week dealt with issues surrounding the Hebrew language, with discussions ranging from whether it unites or divides Jews around the world to if it is possible to really know what the original scribes of the Bible meant since Hebrew words from the same root can have such differing and contrasting meanings.

Our wonderful madricha Danit arrived on Tuesday afternoon to run a peulah for us in preparation for the big move to Jerusalem at the start of February, before Ella and Sophie Petes ran a heart-warming ma’amad in which songs were interspersed with anonymous comments of praise for people in the kvutsah compiled beforehand. Tommy’s group processing activity rounded off the day and allowed us to think back over our time in Karmiel so far in addition to what may lie ahead.

As I write this on Wednesday, we’ve just finished another day of volunteering and are soon to be heading out for a group dinner at a chocolate-themed restaurant in Karmiel’s infamous “Big” center. Needless to say we’re all counting our shekels to ensure we have money aplenty for dessert.

I leave you with this article to give you a better idea of our living situation – we’re convinced it’s written about us: