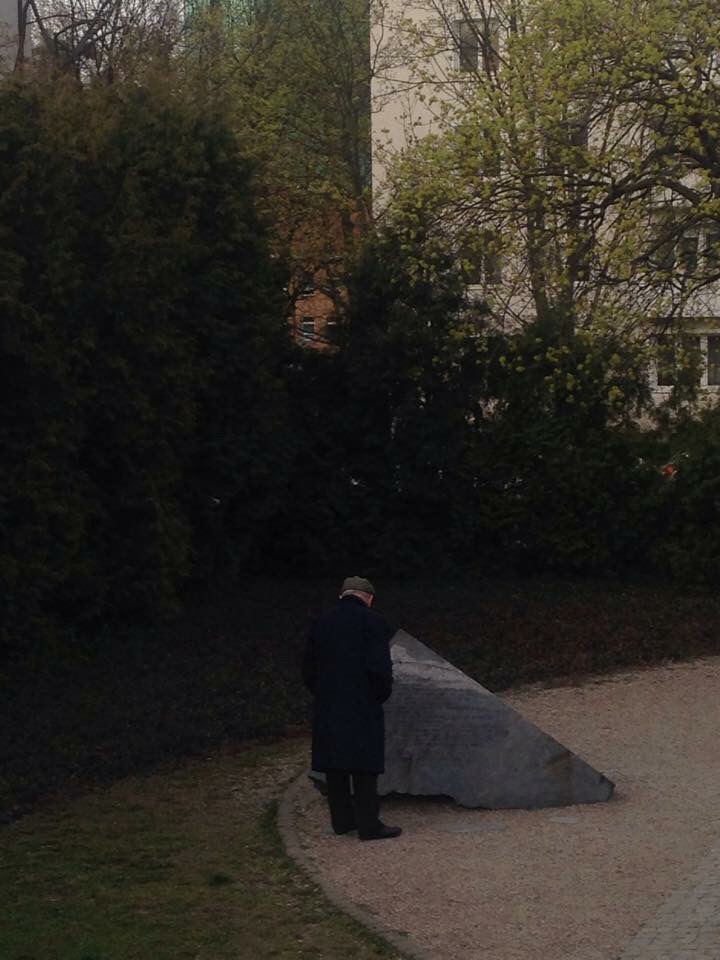 Having been divorced for years, I thought I was done with marriage, but then this handsome chap walked into the room and I thought “oooo!”
…and I suppose the rest is history.’
Those are the exuberant words of Jean, recounting meeting her future husband for the first time at a dancehall in Leeds. Her permed blonde hair bobbed up and down to the rhythm of a rasping northern accent.
Looking into his wife’s eyes, Arek, 86, giggled with the audience. The joke lay in the preposterous everydayness of their first encounter. Arek’s story is otherwise far from normal.
He grew up in Sieradz, one of the oldest towns in Poland with a rich royal history. When Arek, the son of a boot-maker, was born in 1929, Jews represented almost half of the town’s population. Despite a four hundred year cycle of exile and readmission, the community had put down firm roots in Sieradz. Amongst its 5,000 Jewish inhabitants, Arek and his four siblings included, there were Jewish welfare associations, a full complement of rival Zionist and anti-Zionist youth movements, and numerous shtiebel-cum-synagogues. The town embodied the explosion of Jewish creativity experienced in Poland around the time.
But when the Third Reich annexed Poland in 1939, the Jewish community was quickly and systematically destroyed. Within a year, Jewish men were wearing yellow stars and boarding trains to labour camps. Aged eleven, Arek was sent to an SS-run labour camp, Otoschno. It may not have been a death camp, but it was a camp of death in the fullest sense. After a year and a half, only eleven remained of the two-and-a-half thousand men sent from Sieradz. Arek survived by cleaning the camp commander’s office and stealing morsels of food, and was sent home in 1942.
I hesitate before describing circumstances like this as ‘luck’: to describe as ‘luck’ Arek’s witnessing of the murder of almost every man in his community, then returning home to Sierdaz with the burden of knowing what had happened, yet deciding that the women and children should not know a thing.
I also hesitate before describing as ‘luck’ being sent from Lodz ghetto to Auschwitz-Birkenau as a fourteen year-old orphan, and surviving. Arek and his left-arm, indelibly inked with the numerals B7608, spent two years there. As an agricultural labourer for the SS, he ploughed the charred remains of burnt Jewish bodies into the ground as fertiliser. By night, he slept in a bunker made for horses.
When the Red Army liberated Terezen, where Arek had been transferred, they discovered thousands of emaciated Jewish bodies ebbing between life and death – his being one of them. It might not be a story of “luck” per se, but Arek’s is a remarkable one nonetheless.
It took thirty years until Arek started talking about his experiences.
Last Friday I returned from March of the Living, a six-day Holocaust education programme in Poland. I was on a bus of youth movement madrichim. On the final day of programme, alongside ten thousand Jews from across the world, we triumphantly walked from Birkenau to Auschwitz I. The spectacle of Jews, singing and dancing, walking freely out of Auschwitz, was irresistibly beautiful.
Arek accompanied us everywhere, including Auschwitz-Birkenau on two consecutive days. It was difficult to comprehend he had actually inhabited the complex for two years. Auschwitz-Birkenau had not been his home or house, maybe his dwelling place – but there is no word that adequately illustrates the conceptual relationship between a concentration camp and its inmates.
Everything about him and his mannerisms was poetic. Watching Arek at a bakery in Zamość, slipping seamlessly into Polish to buy a loaf of challah and later exclaiming that he “still spoke Yiddish too!” but had no one to speak with, smacked of the shtetl-world he grew up in. That world does not exist anymore. And so the northern twang that accompanied his Polish-Yiddish accent was sometimes amusing, but other times haunting, a reminder of the tragedy the man had witnessed.
In that the Holocaust affected Jews of varying religious and political perspectives, I find imposing a particular ideological narrative on the event quite questionable. The homogeneous sea of Israeli flags accompanying us on the “march” was at most uncomfortable and at the very least inconsistent with the spectrum of beliefs and backgrounds of the Jewish victims in the Holocaust.

Was Arek a Zionist when he was sent to Otoschno aged eleven? Would the Polish Bundists or Parisian cosmopolites who died in Auschwitz have accepted their lives being co-opted into an expression of Zionist euphoria seventy years on? I do not know, but nor do I think the question assumes ultimate importance now.
What I am interested in is the fact there are very few people like Arek left and that in the next few years, the opportunity to meet Holocaust survivors will cease to exist. Any one can go on March of the Living. That is is my recommendation.
http://www.marchoftheliving.org.uk/ Arek in the Warsaw Ghetto